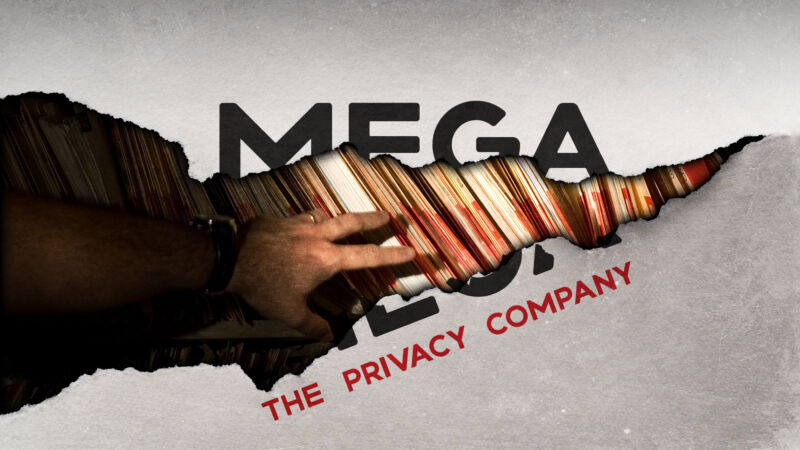 In the decade since larger-than-life character Kim Dotcom founded Mega, the cloud storage service has amassed 250 million registered users and stores a whopping 120 billion files that take up more than 1,000 petabytes of storage. A key selling point that has helped fuel the growth is an extraordinary promise that no top-tier Mega competitors make: Not even Mega can decrypt the data it stores.

On the company’s homepage, for instance, Mega displays an image that compares its offerings to Dropbox and Google Drive. In addition to noting Mega’s lower prices, the comparison emphasizes that Mega offers end-to-end encryption, whereas the other two do not.

Over the years, the company has repeatedly reminded the world of this supposed distinction, which is perhaps best summarized in this blog post. In it, the company claims, “As long as you ensure that your password is sufficiently strong and unique, no one will ever be able to access your data on MEGA. Even in the exceptionally improbable event MEGA’s entire infrastructure is seized!” (emphasis added).

Third-party reviewers have been all too happy to agree and to cite the Mega claim when recommending the service.

A decade of assurances negated

Research published on Tuesday shows there’s no truth to the claim that Mega, or an entity with control over Mega’s infrastructure, is unable to access data stored on the service. The authors say that the architecture Mega uses to encrypt files is riddled with fundamental cryptography flaws that make it trivial for anyone with control of the platform to perform a full key recovery attack on users once they have logged in a sufficient number of times. With that, the malicious party can decipher stored files or even upload incriminating or otherwise malicious files to an account; these files look indistinguishable from genuinely uploaded data.

website. “Additionally, the integrity of user data is damaged to the extent that an attacker can insert malicious files of their choice which pass all authenticity checks of the client. We built proof-of-concept versions of all the attacks, showcasing their practicality and exploitability.”

After receiving the researchers’ report privately in March, Mega on Tuesday began rolling out an update that makes it harder to perform the attacks. But the researchers warn that the patch provides only an “ad hoc” means for thwarting their key-recovery attack and does not fix the key reuse issue, lack of integrity checks, and other systemic problems they identified. With the researchers’ precise key-recovery attack no longer possible, the other exploits described in the research are no longer possible, either, but the lack of a comprehensive fix is a source of concern for them.

“This means that if the preconditions for the other attacks are fulfilled in some different way, they can still be exploited,” the researchers wrote in an email. “Hence we do not endorse this patch, but the system will no longer be vulnerable to the exact chain of attacks that we proposed.”

Mega has published an advisory here. However, the chairman of the service says that he has no plans to revise promises that the company cannot access customer data.

“For a short time, there was potential for an attacker to negate our commitment, in very limited circumstances and for a very few users, but that has now been fixed,” the chairman, Stephen Hall, wrote in an email.