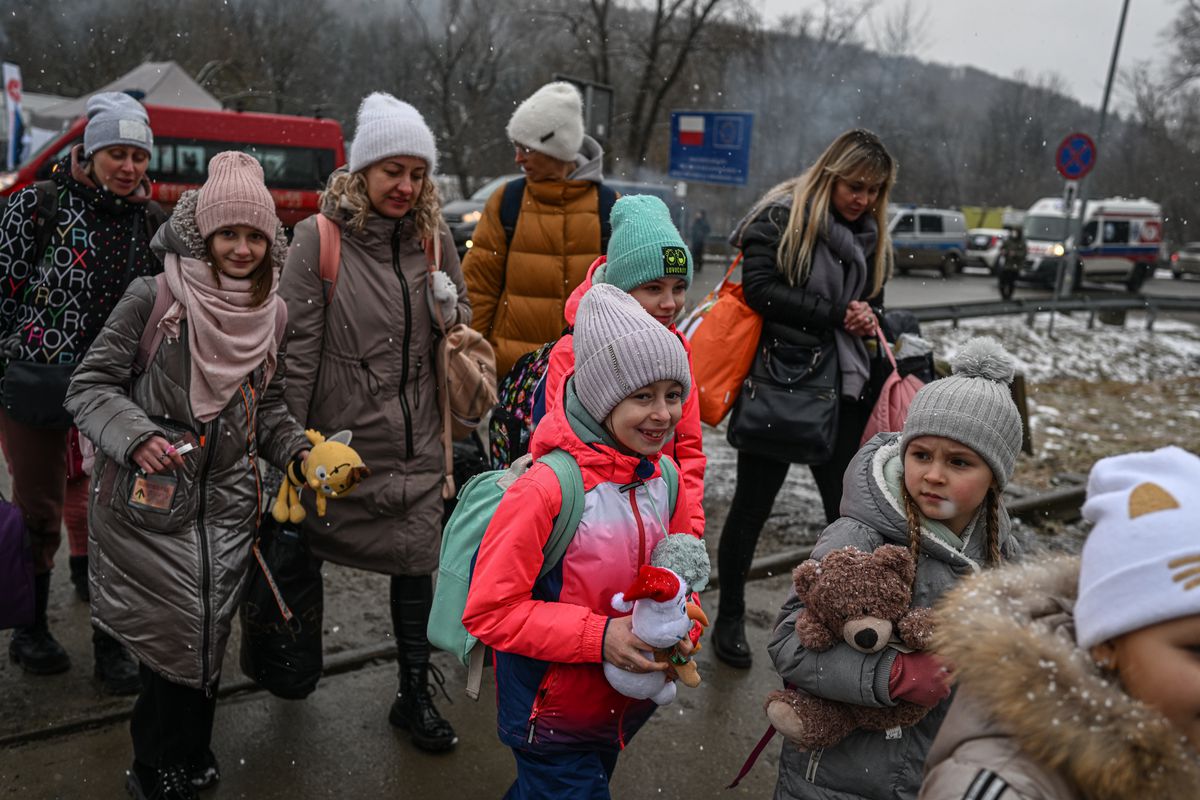 Booking an Airbnb in the middle of a war zone is not the average person’s idea of a good vacation plan. But as the Russian war on Ukraine enters its third week, with more than 2 million Ukrainians having fled the country and nearly that many internally displaced, ordinary people around the world are looking for ways to show solidarity with and support of the Ukrainian people. One novel method gaining popularity is booking Airbnbs in major Ukrainian cities like Kyiv, Kharkiv, Odessa, and Lviv — without any intention of staying there.

This way of giving appears to have been popularized by online influencers, and according to a spokesperson from Airbnb, as of March 4, people around the world have already used the platform to book more than 61,000 nights in Ukraine, with over half of those bookings (34,000) being made by people in the United States. The total booking value comes to nearly $2 million. Because Airbnb is temporarily waiving guest and host fees for bookings in Ukraine — and because hosts get paid about 24 hours after a guest checks in — booking Airbnbs has come to look like a quick and effective way to get cash directly into the hands of beleaguered Ukrainians in cities under siege like Kyiv.

Donors have also taken to buying products from Ukrainians off Etsy and eBay — either digital goods or physical ones they have no intention of receiving — as well as reserving rides through services like BlaBlaCar for transporting Ukrainian refugees to safety.

written about the trend, noting that digital technology has given people greater agency in seeing how, where, and who their donations go to.

But that trend raises two fundamental questions: Why has booking Airbnbs become such an attractive way of supporting Ukrainians? And just how effective is the method compared to other forms of charitable giving that could be directed toward Ukraine?

Social and digital media can help forge at least the impression of intimate social connections, and since people tend to be more motivated to give to identifiable recipients, new platforms could help boost donation. But the kind of giving that is most psychologically rewarding may not be the most effective, and previous cases of viral digital campaigns — including ones led by those who have been promoting the idea of booking Airbnbs as aid — have ended up less helpful than they initially appeared.

In the case of booking Airbnbs or buying things off Etsy, for instance, you’re helping a specific subset of the population in Ukraine that already has access to better resources, whether Airbnb-able property or simply the internet. Those in the most dire need could be left out altogether.

Nevertheless, as Tyler Hall, director of communications at the direct cash transfer nonprofit GiveDirectly, put it to me, “The most effective use of your dollar can be discussed and debated, but during a crisis when people are fleeing right now and you’re watching it in real time, there’s seemingly no completely ineffective way to help someone who is running from these issues, or staying in and navigating with these issues and income interruptions.”

In a crisis like this one, any help is better than no help. Booking Airbnbs could be an important first step to getting those who would otherwise not have donated to flex and build their charitable muscles, and the innovations in charitable giving taking place to support Ukrainians could hopefully also be extended and scaled up to support others in more neglected crises and conflicts.

Hall told me that people identify with the Ukrainian hosts whose Airbnbs they are booking.

“Our experience doing universal basic income and poverty alleviation in Africa shows that when you know a sense of the name and face of the person you’re reaching, exactly where, with some immediacy and transparency, it builds trust, but also builds connection.”

This is backed by existing research that people identify more with “individual victims” than “statistical” ones. Giving cash directly to an identifiable individual or family allows donors to build deeper relationships with recipients than a donation to traditional relief organizations that will make its way to recipients the donor will never know.

But the power of identification is double-edged. As Mukherjee noted, there is an “underlying subtext nobody wants to talk about” — namely, that Ukraine offers up a crisis and victims that people in countries like the US, UK, and Canada (the top three countries that have been booking Airbnbs for Ukrainians) can more easily identify with for reasons of race, religion, and geography. That’s much less the case for the tens of millions fleeing long-running conflicts in Syria, Yemen, Somalia, and other places in Africa and Asia, a dichotomy that has been apparent in much of the Western media coverage of the war in Ukraine.

People may also be turning to Airbnb (which is neither a charity nor a financial institution) as a way of sending money directly because there are few other channels to do so outside of donating to big humanitarian NGOs. According to Mukherjee, current international regulations on the movement of funds across the world are so strictly focused on anti money laundering and counter-terrorism efforts that they make it hard to get funds to people affected by crises. And while tech platforms have taken a media hit in recent years, the 2022 Trust Barometer report from the PR firm Edelman found that people globally trust business more than governments, NGOs, and the media — and within the category of businesses, they trusted tech companies most of all.

“If I can use the platform, which I’ve been using for the last 10 years, say, to book and pay for a homestay in Virginia,” said Mukherjee, “[then] in the same way, I can help somebody in Ukraine.”

The effectiveness of Airbnb altruism

The main problem with donating to Ukrainians via booking Airbnbs is who is being helped — and more importantly, who isn’t. Hall told me that by booking Airbnbs, people are “reaching folks primarily who speak English, who sell on Etsy or Airbnb in major cities.” As an active war zone, everyone in Ukraine is in some kind of need, but providing aid via Airbnbs is “not a system that’s designed to reach the most vulnerable or the people in poverty.”

Ukraine is among the poorest countries in Europe, with a GDP per capita even lower than its neighbor and Russian ally Belarus. As of 2021, more than 30 percent of the population did not have access to the internet. At best, Mukherjee said, “you are choosing maybe the top 5 percent, maybe 1 percent, of the Ukrainian population. So let’s not fool ourselves, this is not effectively targeted.”

The most effective form of giving would likely mean donating to the many humanitarian organizations operating in Ukraine and Eastern Europe, as Vox’s Kelsey Piper highlighted in a recent story. And while Airbnb has a way of verifying hosts, you still run the risk of encountering fake listings that are just taking advantage of people’s generosity.

At the same time, though, this method of giving cash directly through Airbnbs may have inspired first-time donors or people who would otherwise not have given to Ukrainians. GiveDirectly is considered one of the world’s most effective charitable organizations, but as Hall told me, “You always have to weigh people’s desire to give as part of that effective discussion.” And enabling these first-time donors to donate can “unlock” money and donations that otherwise wouldn’t exist, which is effective in its own way.

This is something GiveDirectly encountered when it expanded its work, which had mostly been among the extreme poor in sub-Saharan Africa, to the US. During the early days of Covid-19, GiveDirectly ran the largest donor-funded direct cash transfer program in US history to help vulnerable people weather the pandemic. GiveDirectly brought in a whole new group of donors during their Covid-19 campaign in the US, many of whom have continued to support their international campaigns.

“Engaging people whose instincts are to give directly, which is one of the most effective ways to help people in this situation, builds up a lifetime of engaged and concerned and active givers for all programs,” Hall said.

There are also important lessons here for large institutions that traditionally collect and deliver most humanitarian aid. Increasingly, donors want a more trustworthy, human connection with those they are sending their cash to, and easy, accessible ways to achieve that can help “nudge” individuals into donating more deliberately and effectively.

“I do think that [the phenomenon of people booking Airbnbs to support Ukrainians] should serve as a model for all direct cash work,” Hall told me. “People who are doing other interventions, to give that connection between donor and recipient and not discount how profound that is in a globally connected world.”

The reaction to Russia’s onslaught on Ukraine has inspired innovative new ways of supporting people on the ground. Two students at Harvard designed their own “stripped-down” version of Airbnb to quickly connect Ukrainian refugees with emergency housing, Google rolled out an air raid alerts system for all Android phones, and the US State Department has even partnered with GoFundMe to establish a channel for businesses, philanthropies, and individuals to support organizations providing humanitarian assistance to Ukrainians. Separate from individual customer bookings of Ukrainian properties, Airbnb has started a refugee fund, where it is aiming to offer free, short-term housing to up to 100,000 refugees fleeing Ukraine.

These are all positive developments for Ukrainians in dire need of good news. But as Mukherjee pointed out, the participation of big corporations like Airbnb, Google, and Uber in supporting Ukrainians can and should be scaled up elsewhere. “This is also an opportunity to raise awareness of the need in places like Yemen, Syria, Afghanistan, and those refugees who are stuck at the border in Poland, who are being pushed back into Belarus.”

Businesses in the West like Airbnb can provide ways to donate and support people in different conflicts and crises, both those today and those to come. “[Airbnb can say], ‘Well, you can transfer money to Ukraine and for refugees to help,’” Mukherjee said. “They might as well say, ‘You know what, we’re also going to do something about Yemen, do something about Syria, and there is a need in Afghanistan, and here are four organizations that are working in the field.’”

This could encourage those who may be first-time donors to keep on giving — and support those around the world who are in the most need, whether or not they show up on cable news and social media feeds.