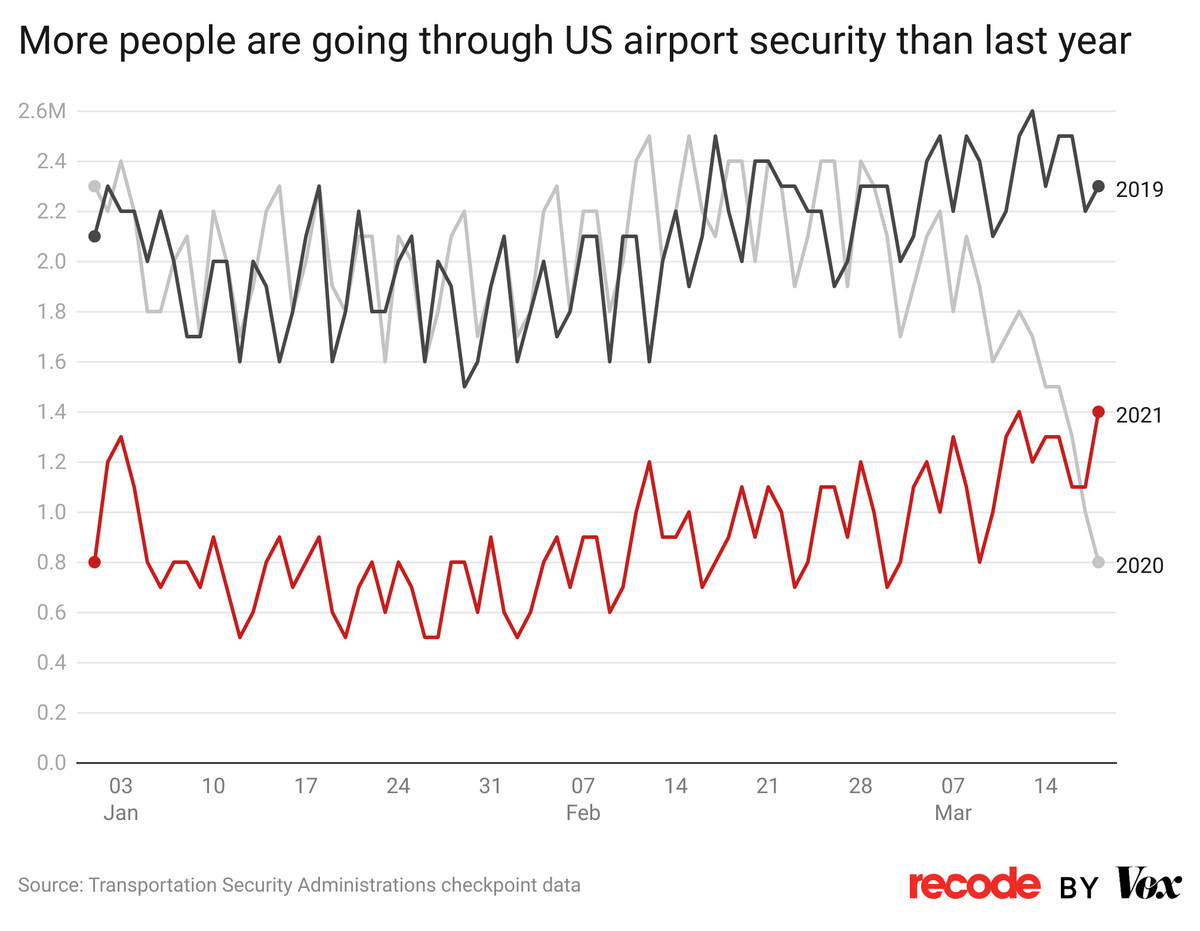 The number of people flying each day in the United States officially surpassed last year, according to checkpoint data from the Transportation Security Administration (TSA). It seems Americans are increasingly behaving like they’re done with the pandemic, even as it continues to wreak havoc on the country.

The number of people who passed through TSA checkpoints at airports in the US surpassed last year’s numbers for the first time earlier this week, with 1.1 million people doing so on Wednesday versus fewer than 954,000 a year ago. That gap was even wider Thursday, with 1.4 million people clearing checkpoints in the US — nearly double what it was a year earlier.

Flightradar24. That means flights are fuller than they had been at the beginning of the pandemic as well, which might also mean they’re more likely to spread the virus.

The surge in air travel is happening for a few reasons, including increased vaccination rates that may make people feel more comfortable traveling, spring break for many young Americans, and general fatigue with how the pandemic has changed our lives. It’s been a year since many cities and states around the US went into lockdown and people were urged not to travel. After so much time stuck at home, people seem eager to return to normal life.

50,000 new cases recorded each day, compared to a few hundred at this point last year. Even accounting for the fact that Covid-19 tests were less available then, the situation is much worse now. Thousands of Americans are dying each day and cases are spiking in a number of states, such as Michigan. Additionally, a number of highly contagious Covid-19 variants could cause another wave of new cases.

Traveling increases people’s chances of getting and spreading the coronavirus, according to the Centers for Disease Control and Prevention (CDC), whose guidelines tell people to delay travel and stay at home. The US requires all people traveling into the US to have a negative Covid-19 test, but the same guidelines aren’t mandatory for people flying within the US. And while a number of industry studies have said that flying is safe, some of their models are suspect.

So even though it’s clear Americans are impatient to get back to activities like flying, it’s not clear yet if vaccinations are happening fast enough to prevent another wave.