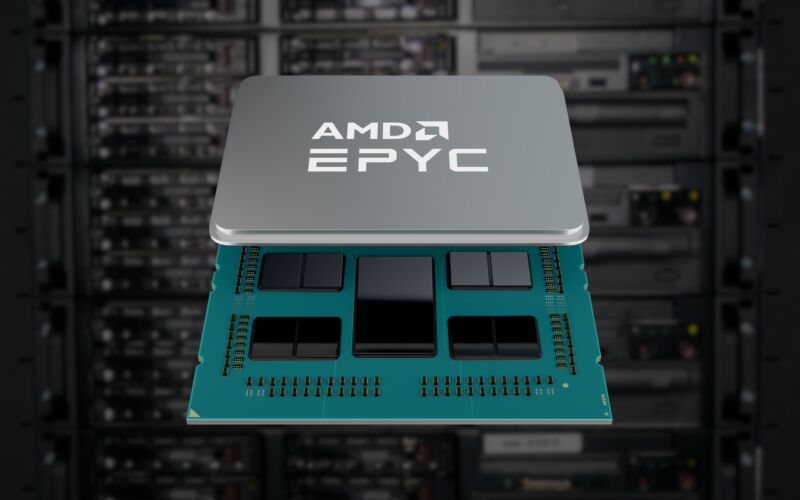 Earnings reports for tech companies this quarter have been mixed at best. Apple, Microsoft, Alphabet, and others have managed to eke out a little growth, while the likes of Meta and Nintendo shrank a little, and most companies’ projections for the next quarter are also less-than-optimistic.

One company that has been hit particularly hard is Intel, which saw its revenues decline from $19.6 billion in Q2 of 2021 to $15.3 billion in 2022. The company’s earnings presentation (PDF) showed weakness across the board for a variety of reasons: weaker demand for consumer PCs, money invested in getting the Arc dedicated graphics products off the ground, and “competitive pressure” in the server CPU market.

That competitor is AMD, whose EPYC line of server processors was just one bright spot in a record quarter for the company. Revenue increased from $3.9 billion in Q2 of 2021 to $6.6 billion this year, with $673 million of that additional revenue coming from EPYC processor sales and the company’s data center division. This is a big deal for AMD, which had some success with its Opteron server CPUs in the mid-2000s but had mostly ceded that ground to Intel throughout the 2010s.

Steam Deck (and in spite of reduced GPU sales as the cryptocurrency mining boom dies down and GPU prices finally return to normal).

The Intel vs. AMD dynamic in server CPUs mirrors the situation in consumer PCs a couple of years ago. Intel’s next-generation “Sapphire Rapids” Xeon processors have suffered repeated delays, opening up an opportunity for AMD to make headway with its EPYC server CPUs, first by offering more CPU cores than Intel and later by outpacing Intel’s single-threaded performance. Intel has managed to shift this dynamic in consumer PCs somewhat with its 12th-generation Core chips and the Alder Lake architecture, but we’re still waiting for new server chips that could do the same.

One thing Intel’s and AMD’s earnings reports have in common is that they both say the consumer PC market will continue to slump after a couple of years of pandemic-driven strength. AMD CEO Lisa Su predicted that the consumer PC business will be down by the “mid-teens” next quarter, and Intel CEO Pat Gelsinger said that Intel’s OEM customers were “reducing inventory levels at a rate not seen in the last decade.” Nevertheless, both companies have new processor launches slated for later this year, with both Ryzen 7000-series CPUs and 13th-generation Intel Core processors expected in the fall.