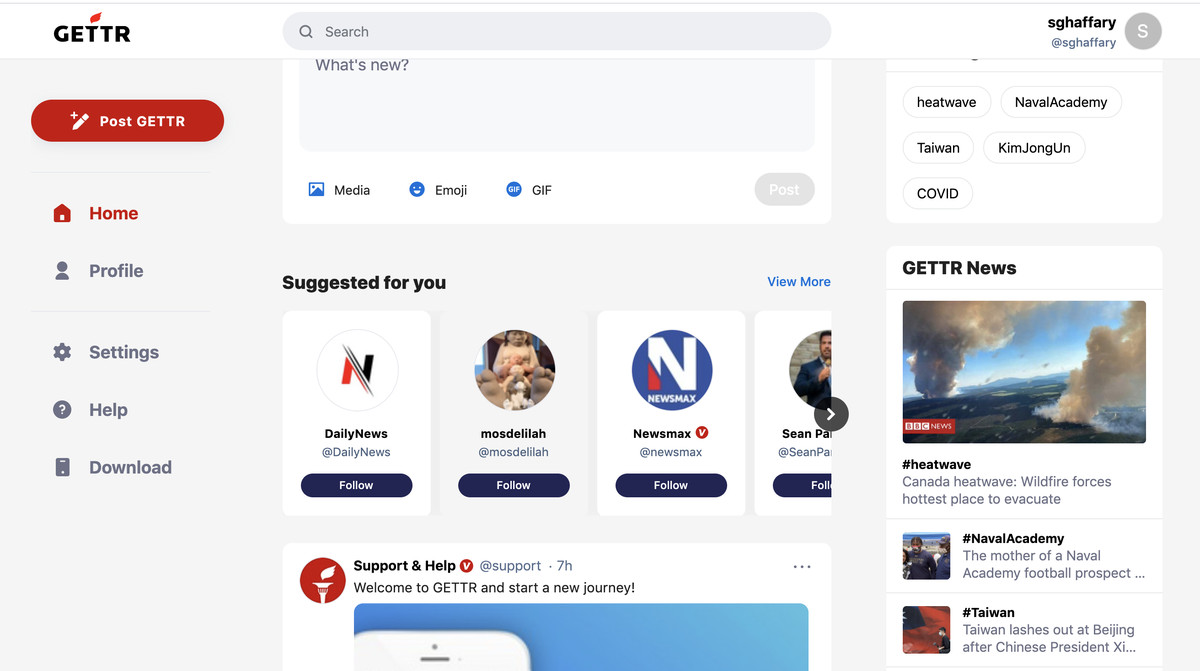 Former Trump spokesperson Jason Miller has started a new social media app that’s aimed at people who take issue with how major social media apps like Twitter moderate content on their platforms. But it seems the app has serious hurdles to overcome to truly compete with other mainstream tech companies.

The app, called Gettr, was quietly released on the Apple and Google app stores in mid-June, according to Politico, which broke news about the app’s launch. Gettr’s mission statement describes it as “fighting cancel culture, promoting common sense, defending free speech, challenging social media monopolies, and creating a true marketplace of ideas.” Many current trending topics on the app reflect pro-Trump slogans and sentiments, including #keepamericagreat, #defendfreedom, and #maga.

But despite the app’s ambitions, it seems to be encountering challenges similar to what other “free speech” social media apps, like Parler, have dealt with since they launched this year with promises not to moderate the content users post on their platforms. For starters: At least for now, Donald Trump is not using Gettr — but one of the reasons why these “free speech” social media platforms have been springing up in the first place is because they’re a reaction to Trump’s ban in January from most major social media platforms. Furthermore, the app is in many ways a knockoff of Twitter, it doesn’t have a lot of users yet, and it’s already a home for blatantly racist posts that would be taken down on most other platforms.

Since Trump was banned from all the major platforms in January for encouraging the US Capitol riot, he has suggested he wants to reemerge on a new social media app that would let him say whatever he wants. That left a major void in the social media ecosystem for Trump’s followers, who are still active online but no longer have the former president’s regular tweets to share and respond to. In the several months since he was banned, mentions of Trump on social media have drastically declined on Twitter and Facebook.

In early June, CNBC reported that Trump was considering joining Miller’s then-yet-to-be-named app. But so far, Trump is not on the app and has not indicated he will join it. Bloomberg White House reporter Jennifer Jacobs tweeted that Trump does not plan to join Gettr and “won’t have any financial stake or participation” in the app. Instead, he still “has plans for a separate platform.”

And Trump reportedly turned down an offer to join Parler, a “free speech” social media app aimed at conservatives because the company refused to ban people who wrote negative comments about him, according to an excerpt of Michael Wolff’s upcoming book about Trump.

And Trump’s own effort to create a platform where he could directly interact with his followers has failed to take off. In May, Trump launched a website called “From the Desk of Donald Trump” that was more like a blog than a robust social media platform. The site gained only a small fraction of the views Trump used to receive on Twitter and Facebook. In early June, less than a month after it began, Trump shut it down.

Currently, Gettr has more than 1,000 downloads in the Apple App Store and Google Play Store each, according to Politico — which isn’t a lot compared to major social media networks (Twitter had 17 million combined downloads on Apple and Google just this past month, according to data firm SensorTower). That being said, the app is only in beta testing and has not been publicized widely until today.

The app appears to be a knockoff of Twitter

Just doing a side-by-side comparison of the apps reveals their similarities: At the top of both apps, Gettr prompts users to post by asking, “What’s new?”; Twitter asks, “What’s happening?”. Both Twitter and Gettr place their feeds on the left and their trending panels on the right, and Gettr offers users “verified” icons with red and white V’s that look a lot like Twitter’s blue and white “verified” checkmarks.

Gettr even lets some users import their old tweets so their Gettr profiles can mirror their Twitter feeds.

Two hashtags with the n-word are already appearing in Gettr’s trending topics, and they link to a slew of anti-Semitic slurs and racist comments targeting Black people.

Gettr currently reserves the right — but does “not commit” — to take down content that is “offensive, obscene, lewd, lascivious, filthy, pornographic, violent, harassing, threatening, abusive, illegal, or otherwise objectionable or inappropriate,” according to the terms of service posted on its website.

Gettr did not respond to repeated requests for comment.

As one social media researcher pointed out, Gettr’s policies about what content is and isn’t allowed are notably vague. And the fact that blatantly racist posts are already appearing on the app proves that its lack of content moderation will be an issue for the company.

So far, Gettr doesn’t seem to be where Trump will make his long-hyped return to social media. But it is another example of the anti-Twitter-and-Facebook social media platforms we’ve seen arise in the vacuum of Trump’s presence on the major networks — and it shows how these platforms will struggle to keep up with established sites that do promise to moderate harmful content.