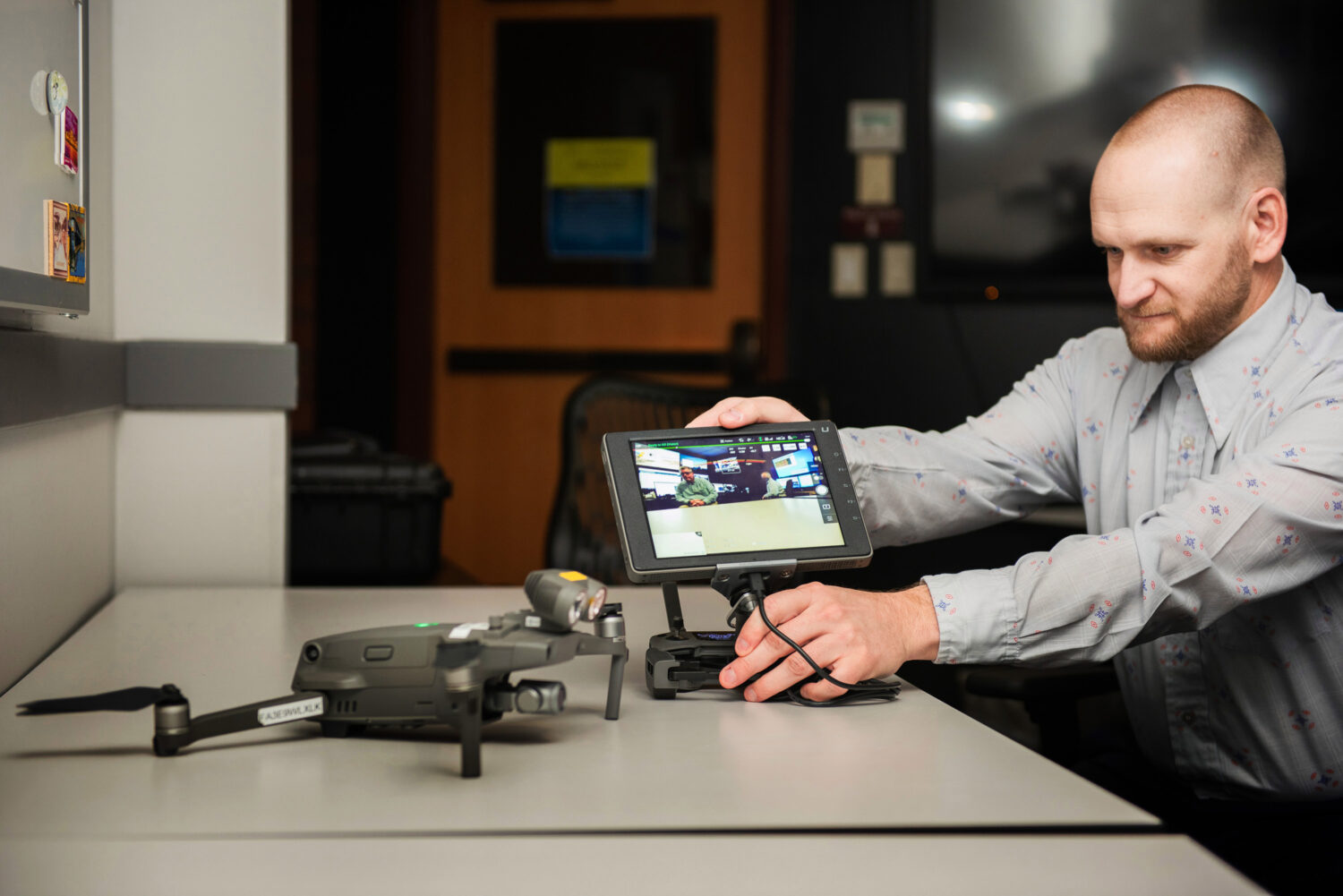 One afternoon, I accompanied Heather West, the detective who’d been perusing gray pickups in the license-plate database, and Josh Terry, the analyst who’d spotted the kidnapper with the Cowboys jacket, to fly a drone over a park abutting a city-owned golf course on the edge of town. West was at the controls; Terry followed the drone’s path in the sky and maintained “situational awareness” for the crew; another detective focused on the iPad showing what the drone was seeing, as opposed to where and how it was flying.

Of all the gadgets under the hood at the real time crime center, drones may well be the most tightly regulated, subject to safety (but not privacy) regulations and review by the Federal Aviation Administration. In Ogden, neighbor to a large Air Force base, these rules are compounded by flight restrictions covering most of the city. The police department had to obtain waivers to get its drones off the ground; it took two years to develop policies and get the necessary approvals to start making flights.

The police department purchased its drones with a mind to managing large public events or complex incidents like hostage situations. But, as Dave Weloth soon found, “the more we use our drones, the more use cases we find.” At the real time crime center, Terry, who has a master’s in geographic information technology, had given me a tour of the city with images gathered on recent drone flights, clicking through to cloud-shaped splotches, assembled from the drone’s composite photographs, that dotted the map of Ogden.

Above 21st Street and Washington, he zoomed in on the site of a fatal crash caused by a motorcycle running a red light. A bloody sheet covered the driver’s body, legs splayed on the pavement, surrounded by a ring of fire trucks. Within minutes, the drone’s cameras had scanned the scene and created a 3D model accurate to a centimeter, replacing the complex choreography of place markers and fixed cameras on the ground that sometimes leave major intersections closed for hours after a deadly collision.

When the region was hit by a powerful windstorm last September, Terry flew a drone over massive piles of downed trees and brush collected by the city. When county officials saw the resulting volumetric analysis—12,938 cubic yards—that would be submitted as part of a claim to the Federal Emergency Management Agency, they asked the police department to perform the same service for two neighboring towns. Ogden drones have also been used to pinpoint hot spots after wildland fires, locate missing persons, and fly “overwatch” for SWAT team raids.

This flight was more routine. When I pulled into the parking lot, two officers from Ogden’s community policing unit looked on as West steered the craft over a dense stand of Gambel oak and then hovered over a triangular log fort on a hillside a couple of hundred yards away. Though they’d never encountered people on drone sweeps through the area, trash and makeshift structures were commonplace. Once the RTCC pinpointed the location of any encampments, the community service officers would go in on foot to get a closer look. “We get a lot of positive feedback from runners, hikers,” one officer explained. After one recent visit to a camp near a pond on 21st Street, he and the county social service workers who accompanied him found housing for two people they’d met there. When clearing camps, police also “try and connect [people] with services they need,” Weloth said. The department recently hired a full-time homeless outreach coordinator to help. “We can’t police ourselves out of this problem,” he said, comparing the department’s efforts to keep new camps from springing up to “pushing water uphill.”