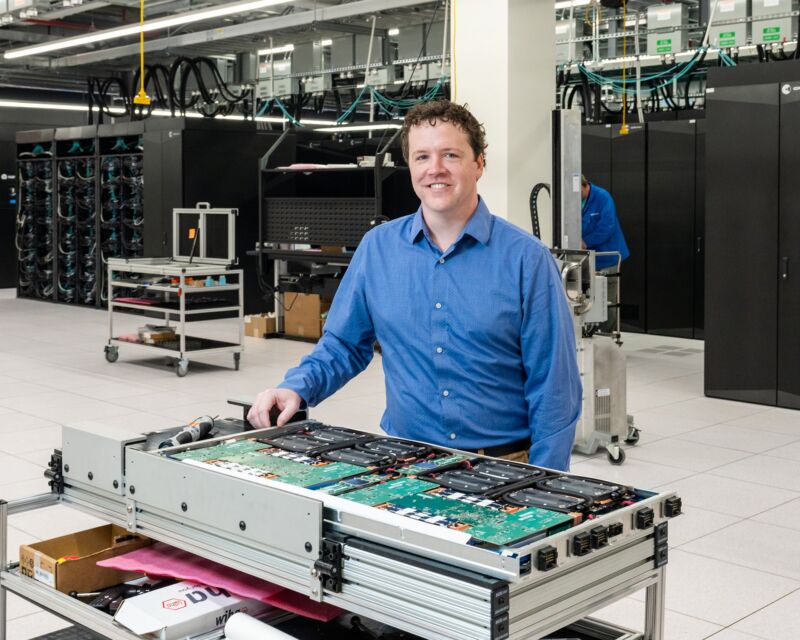 The US has retaken the top spot in the world supercomputer rankings with the exascale Frontier system at Oak Ridge National Laboratory (ORNL) in Tennessee.

The Frontier system’s score of 1.102 exaflop/s makes it “the most powerful supercomputer to ever exist” and “the first true exascale machine,” the Top 500 project said Monday in the announcement of its latest rankings. Exaflop/s (or exaflops) is short for 1 quintillion floating-point operations per second.

Frontier was more than twice as fast as a Japanese system that placed second in the rankings, which are based on the LINPACK benchmark that measures the “performance of a dedicated system for solving a dense system of linear equations.”

“Based on the latest HPE Cray EX235a architecture and equipped with AMD EPYC 64C 2GHz processors, the system has 8,730,112 total cores, a power efficiency rating of 52.23 gigaflops/watt, and relies on gigabit Ethernet for data transfer,” the Top 500 group said. Frontier “is currently being integrated and tested at the ORNL in Tennessee, USA, where it will be operated by the Department of Energy,” the group said.

Although China may also have cracked the exaflop barrier, the US system is the first to have demonstrated the speed in official Top 500 testing.

Frontier was also the second-most efficient supercomputer in the new Green 500 rankings. The top spot in Green 500 was taken by a smaller version of the Frontier system at Oak Ridge, one with 120,832 cores instead of the 8.7 million in the exascale system.

Taking second place in the Top 500 with a score of 442 petaflop/s was the previous top supercomputer, the Fugaku system at the RIKEN Center for Computational Science in Kobe, Japan. While the Fugaku system has a theoretical peak above 1 exaflop/s, Frontier is the only system that has demonstrated it in Top 500 testing, the Top 500 announcement said. ORNL said that Frontier’s theoretical peak is 2 exaflop/s.

Fugaku was in first place starting with the June 2020 ranking and stayed on top in November 2020, June 2021, and November 2021. The US had last held first place in the twice-yearly rankings in November 2019 when Oak Ridge’s IBM-built Summit system posted a score of 148.6 petaflop/s.

announced a $1.8 billion project to develop at least two exascale supercomputers to support a range of scientific research.

“The work to deliver, install and test Frontier began during the COVID-19 pandemic, as shutdowns around the world strained international supply chains,” ORNL said this week. “More than 100 members of a public-private team worked around the clock, from sourcing millions of components to ensuring deliveries of system parts on deadline to carefully installing and testing 74 HPE Cray EX supercomputer cabinets, which include more than 9,400 AMD-powered nodes and 90 miles of networking cables.”

Researchers will “gain access to the fully operational Frontier system later this year,” ORNL associate lab director Jeff Nichols said, adding that it will be available to “scientists and engineers from around the world.”

“Frontier users will model the entire lifespan of a nuclear reactor, uncover disease genetics, and build on recent developments in science and technology to further integrate artificial intelligence with data analytics and modeling and simulation,” ORNL also said.

HPCwire’s coverage of the Top 500 list provided a further description of Frontier’s composition:

Frontier consists of 74 cabinets, each weighing in at 8,000 pounds. 9,408 HPE Cray EX nodes are spread across these cabinets, with each node powered by an AMD “Trento” 7A53 Epyc CPU and quadruple AMD Instinct MI250X GPUs (totaling 37,632 GPUs across the system). The system has 9.2 petabytes of memory, split evenly between HBM and DDR4, and it uses HPE Slingshot-11 networking. It is supported by 37 petabytes of node-local storage on top of 716 petabytes of center-wide storage. The system is 100 percent liquid-cooled using warm (85° F) water, and in terms of space, the final Frontier system occupies 372 square meters.

There are indications that China has two exascale supercomputers. But operators “of those systems have not submitted test results for evaluation” in the Top 500 ranking, possibly due to “tensions between the United States and China,” The New York Times wrote.

Officially, China’s top-ranked system is the sixth fastest in the Top 500. That system, known as Sunway TaihuLight, was ranked No. 1 four straight times in 2016 and 2017 but hasn’t updated its score since. Another Chinese system called Tianhe-2A held the top spot from 2013 to 2015 and is now ninth.

“There are rumors China has something” with exascale power, but “there is nothing official,” Jack Dongarra, a computer scientist who designed Linpack, told The New York Times. Dongarra is a professor at the University of Tennessee and holds a position at ORNL.