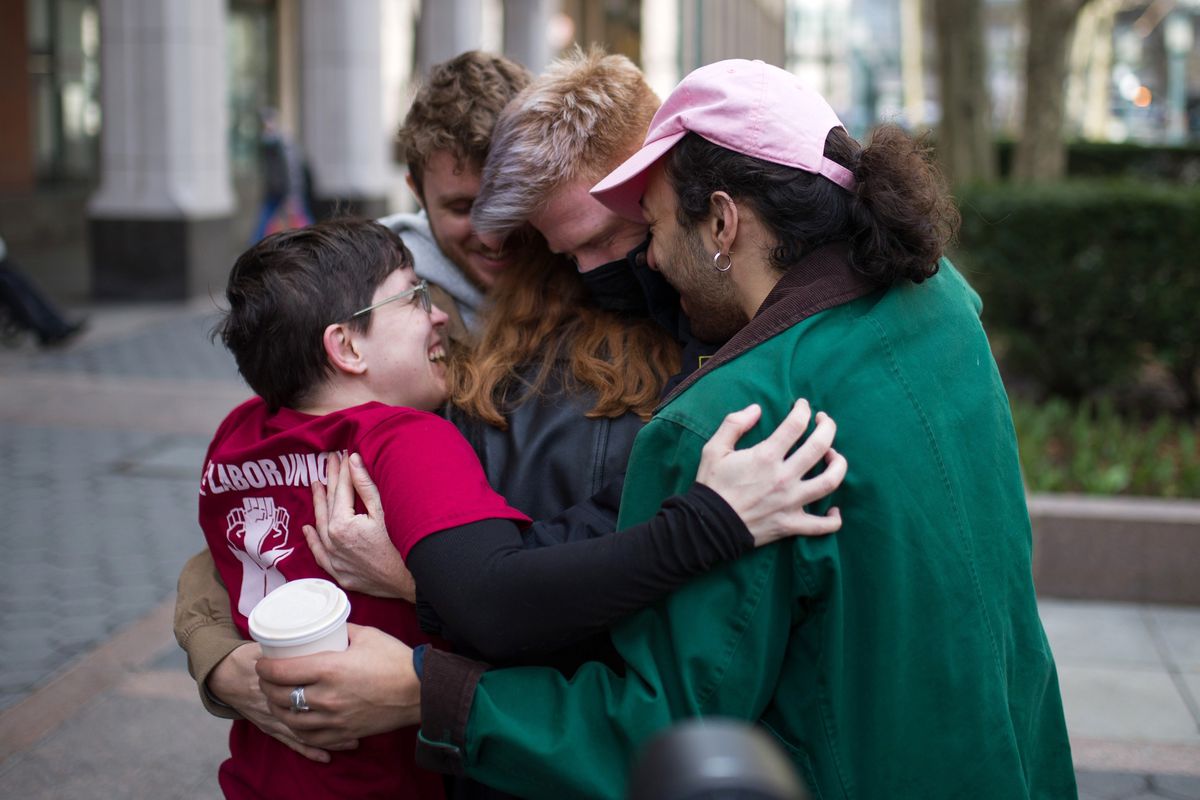 Workers at the warehouse in Staten Island, known as JFK8, voted in favor of being represented by Amazon Labor Union, or ALU. The union captured 2,654 votes, while 2,131 voted against. Another 67 ballots were contested by either Amazon or the union, but the margin of victory was greater than the number of challenged ballots so the results are final. Amazon has five business days to file any objections, and said in a statement that it is considering doing just that.

“We’re disappointed with the outcome of the election in Staten Island because we believe having a direct relationship with the company is best for our employees,” the statement added.

The win comes despite Amazon’s long history of union-busting in the 28 years since Jeff Bezos founded the company in 1994 as an online seller of books. Since then, Amazon leaders have spent considerable time and money to beat back this union drive and others. Perhaps as stunning, the union victory comes during the first-ever organizing drive by this particular union, which was created just last year by former warehouse worker Chris Smalls, who Amazon fired after he led a protest outside the warehouse in the early days of the Covid-19 pandemic. The success of this grassroots approach could serve as a model for future organizing efforts inside of Amazon and beyond. The union win also means that Amazon workers are the latest to have success organizing inside high-profile American corporations, including Starbucks and REI.

This week, votes were also tallied for a re-do election at a separate Amazon warehouse in Bessemer, Alabama, after a National Labor Relations Board official ruled that Amazon illegally interfered with the first election at the facility held in 2021. The union in question, the Retail, Wholesale and Department Store Union, is trailing by a little more than 100 votes, but the outcome is still up in the air because Amazon and the union contested more than 400 additional ballots combined. Those need to be scrutinized at a hearing — and potentially counted — before a final result is confirmed in the coming weeks or months. In the first vote, workers had voted overwhelmingly in Amazon’s favor.

The new Amazon union will now take on another monumental challenge in attempting to negotiate a contract, known as a collective bargaining agreement, with Amazon. ALU leaders have said their main goals include increasing hourly wages for all workers to a minimum of $30 an hour; Amazon says the average hourly starting pay for US warehouse employees is $18. The union has also said it will push for longer breaks for workers and eliminating mandatory overtime outside of a few peak weeks for online shopping.

ALU literature also said its leaders want workers to have union representation present during disciplinary meetings to guard against unjust firings. Amazon’s sky-high worker churn rates are at least partly due to employees quitting or being fired for not being able to keep up with the demanding pace of work. As Amazon has added robots to its warehouses over the last decade, workers in some roles have seen their performance goals increased to the point that they are required to pick or stow 300 to 400 items an hour in 10-hour shifts. Amazon was recently cited for a “willful” violation of Washington state labor laws after a state ergonomic expert determined that the pace and nature of work Amazon requires “create[s] a serious hazard for work-related back, shoulder, wrist, and knee injuries.

it spent around $4 million on labor consultants last year. During the recent union drives in Staten Island and Bessemer, Amazon and firms it has hired have created anti-union websites, convened mandatory meetings during worker shifts to stress the downsides of unions, and sent frequent texts to workers with anti-union messages and encouraged them to vote no.

Amazon has also made technology investments to track and counter the threat of unionization. Going back further, in Amazon’s early years, the company began tracking the potential for unionization at each of its warehouses, building a heat map in Excel to identify “hot spots” in its fulfillment network that might be most susceptible to union activity, according to a former senior HR manager.

Amazon also had history on its side. Prior to the union drives in Staten Island and Bessemer, the only other union vote at a US Amazon facility ended with a small group of equipment technicians and mechanics voting against unionizing at a Delaware warehouse in early 2014. (Amazon later had to post a notice to employees at the facility as part of a settlement agreement with the National Labor Relations Board that suggests the company may have violated labor laws while opposing the drive.) Amazon has also been helped by the fact it has offered pay and benefits packages at times that have been better than some large non-unionized competitors.

Union efforts inside Amazon have also been stymied by the extreme workforce turnover at the company’s warehouse network. A report last year by the New York Times revealed that Amazon churns through 3 percent of its warehouse staff every week, or 150 percent in a single year. Some Amazon employees in Europe, where organized labor is more common, do belong to unions.

The union efforts in Staten Island began with what has long looked like a series of bad miscalculations by Amazon executives. Back in March of 2020, ALU founder Chris Smalls, then an Amazon warehouse supervisor, led a small protest outside the facility to raise awareness around what he felt were unsafe working conditions and a lack of transparency from management during the onset of the Covid-19 crisis.

That same day, Amazon officials fired Smalls, setting off a chain of events that ultimately catalyzed the worker’s efforts and pushed his story further into the spotlight. Shortly after Smalls’s firing, the company’s top lawyer, David Zapolsky, who is white, in an executive meeting attended by Jeff Bezos, referred to the former employee, who is Black, as “not smart or articulate” and encouraged colleagues to make him the focal point of unionizing efforts in dealings with the press. Then, after Zapolsky’s notes from this meeting leaked to the press and corporate employees began to protest and question Amazon’s actions on an internal company listserv, the company fired three key corporate activists and began restricting employees’ ability to communicate on large email listservs.

@amazon wanted to make me the face of the whole unionizing efforts against them…. welp there you go! @JeffBezos @DavidZapolsky CONGRATULATIONS @amazonlabor We worked had fun and made History ‼️✊ #ALU # ALUfortheWin welcome the 1st union in America for Amazon

Amazon had said it fired Smalls because he violated social distancing policies while on paid quarantine leave, but New York Attorney General Letitia James later ruled that Amazon’s firing of Smalls was illegal. A year after the firing, in April 2021, Smalls and several colleagues founded the Amazon Labor Union. Most recently, Amazon called the police on Smalls in February of this year when he showed up to deliver food to warehouse workers. The New York Police Department arrested him and charged him with trespassing, and said Smalls had ignored several requests to leave the property.

The victory by the Amazon Labor Union will likely breathe life into organizing efforts at more Amazon facilities around the country. There’s already another election scheduled for late April at a separate Amazon facility in Staten Island, where workers will vote on whether they too want to be represented by Smalls and ALU.

Beyond that, workers interested in organizing at other large employers with a strong history of union-busting may view the shocking turn of events at Amazon as the catalyst for renewed efforts inside their own company. And in the US labor community, large established unions may reflect on what they can learn from the by-worker-for-worker grassroots strategy of the Amazon Labor Union, which has succeeded when large established unions like the RWDSU so far have not.