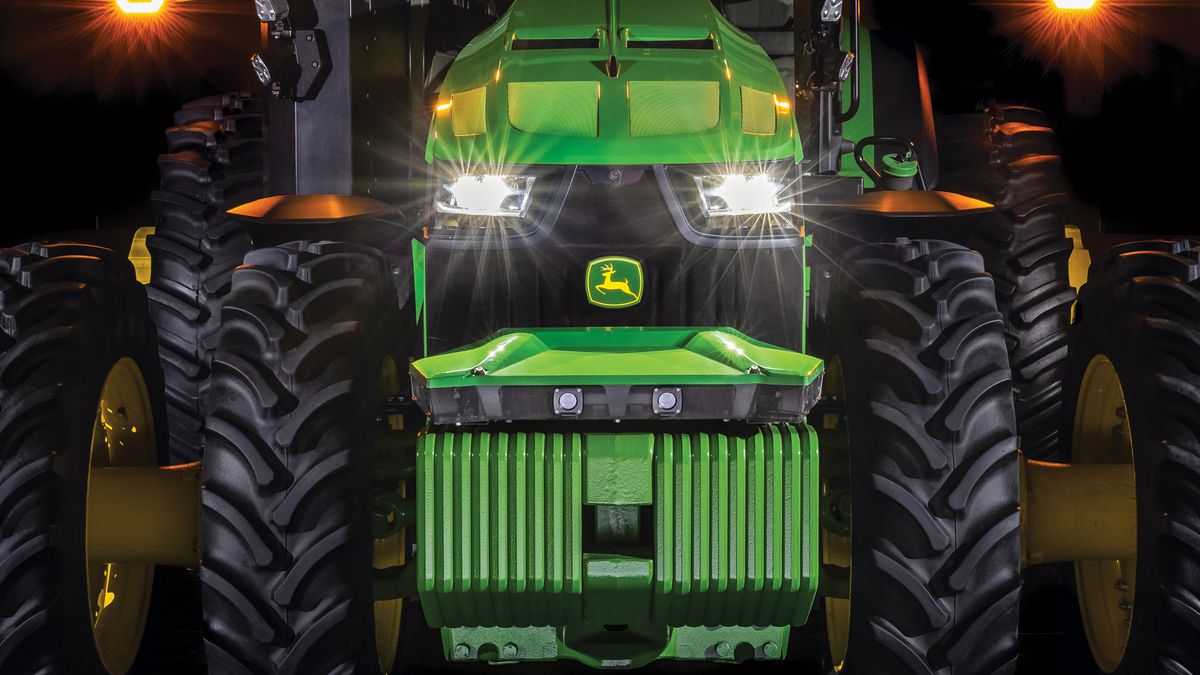 The most exciting gadget of the year isn’t a TV that displays NFTs or a foldable tablet computer or anything related to the metaverse. It’s an autonomous tractor.

More specifically, it’s the self-driving John Deere 8R tractor that can plow fields, avoid obstacles, and plant crops with minimal human intervention. It looks a lot like any other John Deere tractor — it’s green and yellow — but there are six pairs of stereo cameras that use artificial intelligence to scan the surroundings and maneuver accordingly. The farmer doesn’t need to be anywhere near the machine to operate it, either, as there’s a smartphone app that controls everything. The tractor goes on sale later this year, just in time for an extra special robotic harvest season.

“In my view, it’s a big deal,” Santosh Pitla, associate professor of advanced machinery systems at the University of Nebraska, told Recode. John Deere’s equipment accounts for more than half of all farm machinery sold in the United States, and even the simple fact that it’s putting an autonomous tractor on the market will change the way farming works. “That’s big news,” Pitla said, “and it’s good news.”

is a concept that utilizes computers, data gathering, and satellite imagery to build a strategy for maximizing the output of a farm. Autonomous farming equipment like soil sensors, specialized drones, and self-driving tractors are key to a future where we can produce more crops with less effort and less environmental impact. But exactly who’s in charge of that future and who benefits from it is still to be determined.

There’s reason to believe that farmers who own thousands of acres will be first in line to buy John Deere’s new self-driving tractors. With models ranging from 230 to 410 horsepower, the John Deere 8R tractors are big machines designed for big farms. And while the company hasn’t said how much its new autonomous tractor will cost, existing, non-autonomous models in the 8R line can cost over $600,000. John Deere says it will sell the automation system as a kit that can be installed on its other tractor models. The company also says it’s looking into offering a subscription plan, but didn’t specify how much it would cost.

But even if a farmer buys the tractor outright, it’s not clear who actually owns the equipment or the valuable farming data it collects. The newest John Deere tractors are sensor-filled and internet-connected. Almost anything the machine does gets logged and beamed to the cloud from an onboard cellular transmitter, and John Deere has the capability to remotely shut down many of its tractors if it determines that someone has modified their equipment or has missed a lease payment. Many farmers say they can’t even repair the tractors themselves, lest they trip a switch that disables the machine entirely. This means they’re forced to pay John Deere or its authorized repair shops for their maintenance needs. Meanwhile, John Deere’s privacy and data policy says it can share the data about farmers’ activities that its software collects with “outside parties” in certain circumstances.

“I’m all for innovation, and I think John Deere is a helluva company,” Kevin Kenney, an agricultural engineer and right-to-repair advocate, told Wired after John Deere announced its autonomous tractor. “But they’re trying to be the Facebook of farming.”

John Deere isn’t the only one working on autonomous farming equipment, and it’s not even clear that big self-driving tractors are the best use of the technology. Case has an autonomous tractor concept that doesn’t even have a cab for a human driver, and AGCO, which owns farm equipment brands like Fendt and Massey Ferguson, is testing smaller autonomous machines, including a seed-planting robot that’s the size of a washing machine. DJI, the popular drone maker, now has an entire division devoted to flying farming robots that can help with anything from crop monitoring to targeted pesticide spraying.

A number of researchers think that swarms of smaller machines working together are more promising for a wider range of farmers. Pitla, the Nebraska professor, is working on technology that would replace a single 500-horsepower tractor with 10 50-horsepower tractors. Not only could the swarm better handle different terrain and smaller farms, whose land might not be as uniform as large farms, but if one tractor broke, the rest could keep working.

“I’ve seen farmers doing 18 hours of planting because the weather is perfect, the soil conditions are perfect,” Pitla said. “It’s a very timely operation. So in a way, if you have swarms of these machines, you’re distributing the risk.”

When you consider the fact that the farming industry is facing an ongoing labor shortage, which some say is getting worse, the concept of autonomous farming equipment is even more appealing. That fact could alleviate concerns that automation takes jobs away from humans, but it will likely take years before we understand just how disruptive widespread adoption of automation in agriculture could be to the labor market.

Farmers and technologists alike hope that self-driving tractors and other autonomous farming equipment will usher in an era of greater yields. The driving principle behind precision farming is that by better understanding the soil and addressing issues with crops, we can squeeze more productivity out of the world’s limited amount of farmland without a negative impact on the environment. This factors into a growing debate over whether industrialized agriculture is recklessly profit-driven and exploitative of the land, or if consolidating farms is more efficient. With the proper rollout of autonomous farming technology, we could have it both ways.

“Similar to the autonomous car industry, full autonomy of farm vehicles and equipment can also be considered as an important, if not the ultimate, goal in the agriculture industry,” said Abhisesh Silwal, a project scientist who works on agricultural robots at Carnegie Mellon University’s Robotics Institute. He added that automating delicate, time-sensitive tasks like pruning and harvesting, which typically require skilled workers, could help sustainability in the long run.

For now, while researchers make drones and swarm-bots smarter, we’ve got John Deere and its self-driving tractor. Even if it’s not suitable or affordable for every farmer, the new self-driving machine is pushing autonomous agriculture further into the mainstream. And unlike the TV that can display NFTs, this technology can actually help feed the world.