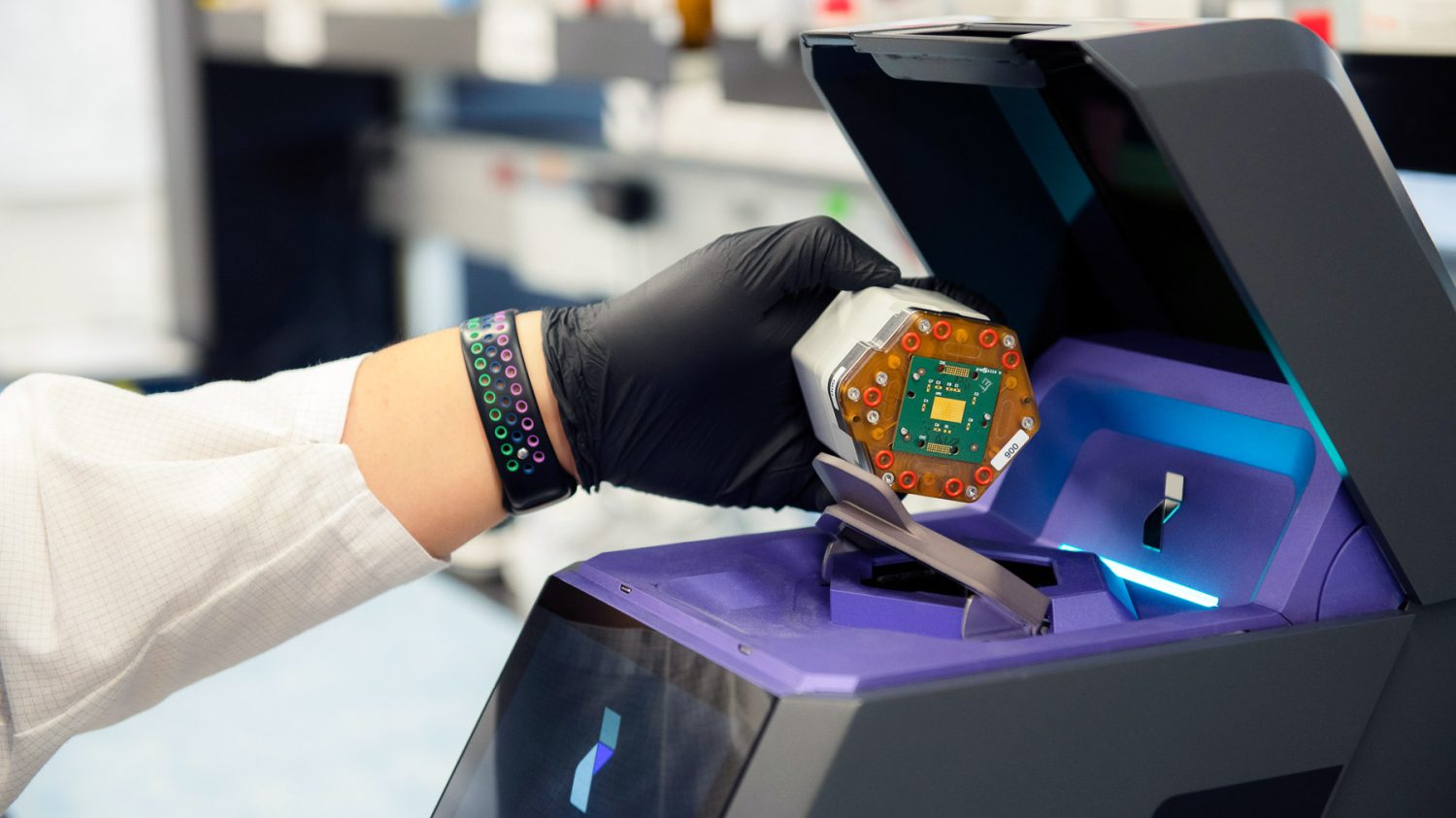 “It’s a great concept. I think it’s long overdue for chip manufacturers to do something for us in biosciences,” says Nils Walter, a chemist at the University of Michigan and co-founder of aLight Sciences, a company that is also developing single molecules as biosensors, except its approach is to use fluorescence, or the emission of light, rather than electric signals to read out the results.

Roswell is not the only company pursuing chip-based biosensors. For instance, Dynamic Biosensors, based in Munich, offers chips with DNA-based sensors that use light. But Roswell’s manufacturing approach produces precise sensors that are flexible enough to envision a “universal biosensor” that can be mass produced with modern chip-making techniques, Merriman says.

The centerpiece of Roswell’s circuits is a molecular wire made from a chain of amino acids that is connected to the rest of the chip just as a regular metallic wire would be. To create a sensor, the lab attaches a molecule to the other end of the wire. When this molecule interacts with its intended target—which can be a strand of DNA, an antibody, or any of a number of other biologically relevant molecules—its electrical conductivity changes. The chip records this change, and software extracts the corresponding interaction details.

To assemble thousands of sensors, Roswell starts with a silicon chip studded with prefabricated nanoelectrodes, then uses electric voltage to pull molecules out of solution and onto the chip. This part of the assembly process takes under 10 seconds; in the past, similar molecular processes took hours or even days.

Roswell’s approach could revive some of the hopes molecular electronics researchers had 20 years ago. At that time, it seemed like the small size of molecules could help make circuit components tinier and computational chips denser. Intriguingly, a molecular chipmaker could, in principle, “self-assemble” circuits, adding molecules under highly controlled conditions and letting them assemble into the desired structures all by themselves, explains George Church, a Harvard geneticist and a member of Roswell’s scientific advisory board.

Excitement about such molecular properties led to a rapid growth of the molecular electronics field in the late 1990s. It seemed like the perfect moment. “There were all these predictions all through the ’80s and ’90s, about how silicon was going to hit a brick wall,” Tour recalls. But it didn’t; engineers kept pushing ahead. “We were not shooting at a static target. Silicon just kept getting better performing,” he says. Philip Collins, a physicist at the University of California, Irvine, who has previously consulted for Roswell, says the ensuing downfall of molecular electronics was rather dramatic: “I would say nine out of 10 researchers dropped out.”

With the new chip, Roswell is instead targeting an application for which silicon is ill-suited. Molecules are special because “they can be so much more complex than binary,” Collins says. “They can encode all these interesting different states, like in biochemistry, that we just don’t have other ways of accessing.”

The new vision, shared by Roswell and other on-chip molecular technology makers, is of biosensors that would enable people to check in on biomarkers like vitamin levels or evidence of an infection with only a little more hassle than it now takes to check their heart rate on a smartwatch. In Roswell’s case, thousands of biosensors could detect different molecular interactions simultaneously, and the chips would be disposable.

University of Michigan’s Walter notes that though Roswell’s device can accommodate more than 10,000 biosensors on one chip, having hundreds of thousands, or millions, more would push the device toward a more marketable functionality, especially when it comes to detecting low concentrations of biomarkers in early disease.

The commercial biotechnology market is not a new arena for Church, Merriman, and other company leaders. But the Roswell team’s experience and expertise has not made the company’s financing journey as easy as CEO Paul Mola once hoped. After the company’s paper in January, Mola says, he expected venture capital to pour in, but that didn’t happen. Although Roswell has raised more than $60 million so far, primarily from strategic investors and representatives of wealthy families, it had to nearly halve its workforce in February.

Mola is frustrated by the lack of investment in the company when it is, he says, so close to commercialization. “We feel that we’ve actually done a lot with so little,” he says. “Now we really need the community to step up and support us and take us all the way.”

Mola, who is Black, says part of the problem lies with the biotech industry’s troublesome track record with diversity—a concern that Stat reported in early March. “If you think about entrepreneurs and founders, they’ve generally had an entrepreneur in their family, they have networks and investor access. From a systemic and fundamental point of view, Black founders don’t have that,” he says. “I don’t have that.”

Roswell is still on track to release a commercial device by the end of the year, Mola says. The startup is about to start its next funding series. It is also introducing a service that may draw in customers before it is possible to sell chips to them directly: scientists will now be able to send samples to Roswell and have its molecular biosensors work on them in house, gathering valuable data about, for example, the real-time function of new drugs.

For Tour, Roswell’s work continues to be a symbol of the rebirth of molecular electronics: “It’s nice to be able to see something happen and to say, OK, it did work, we just took longer than we thought.”

Karmela Padavic-Callaghan is a freelance journalist based in Brooklyn, New York.