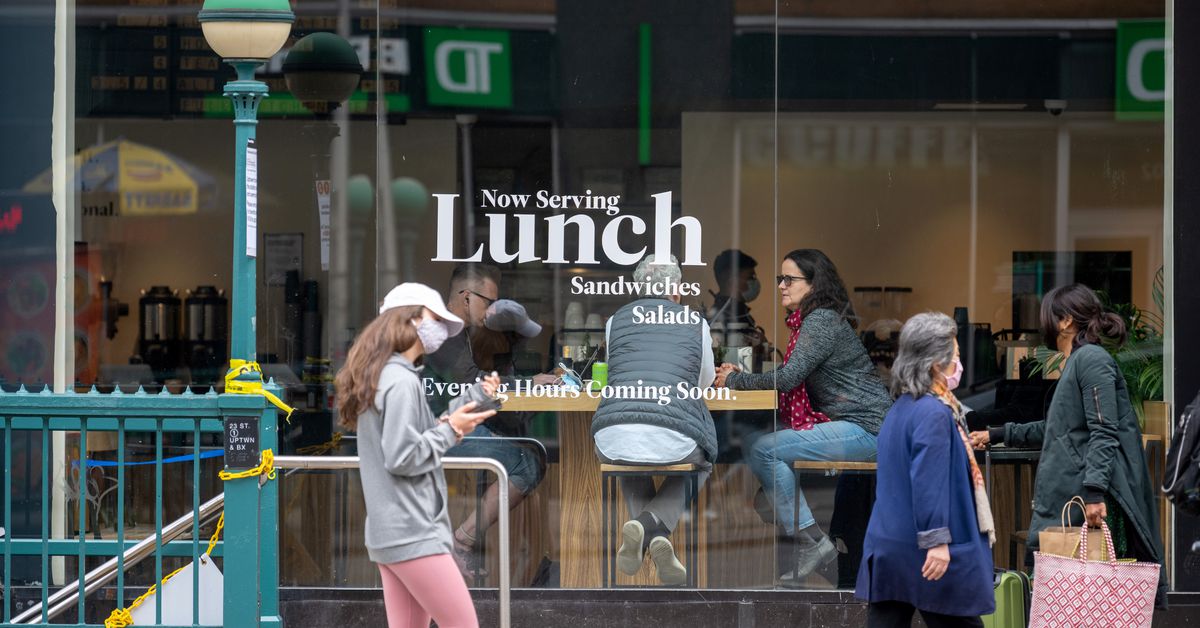 Starting in September, New York City will require people to prove they’ve received at least one dose of a Covid-19 vaccine to eat indoors, visit gyms, and go to theaters. The new program is called “Key to NYC Pass,” but it does not, as the name might imply, involve the release of a new app or vaccine passport. Instead, people can show a paper CDC vaccine card or an existing vaccine passport app to prove their status.

The initiative marks the first time a major US city has issued a vaccine mandate like this, and it immediately confused the public.

New York City Mayor Bill de Blasio said in a Tuesday press conference that the Key to NYC Pass — which, again, is a program, not an app or a vaccine passport — is meant to boost inoculation rates across the city. The announcement comes just a day after New York Gov. Andrew Cuomo encouraged private businesses to require Covid-19 vaccination for entry to bars and restaurants. Right now, about 30 percent of adults in New York City still haven’t gotten vaccinated. That’s about on par with the rest of the United States.

Not all the details for the new program are clear. Mayor de Blasio says the program will begin August 16, and that more information about the plan will become available in the coming weeks. The system is launching on a voluntary basis beginning on August 16, and the city will start enforcing the new requirements on September 13, after Labor Day, when city officials expect indoor activities to become more popular. City Hall told Recode it planned to do outreach to the affected industries about enforcement of the new rules but did not provide more details.

“The goal here is to convince everyone that this is the time. We’re going to stop the delta variant,” de Blasio told reporters. “That means getting vaccinated right now.”

De Blasio explained that, in addition to showing a CDC card, people can use two government-supported apps to prove their status: New York State’s Excelsior pass, which links up to the state’s vaccine registry and provides a QR code for venues to scan in order to verify a person’s status; and the newer NYC Covid Safe app, which is essentially just a handy place to store pictures of CDC vaccine cards, Covid-19 test results, and photo ID. (Some have criticized the NYC Covid Safe app for lacking security features as it does not currently verify the validity of vaccine credentials.)

Still, the announcement left many thinking that the Key to NYC pass program would involve the launch of yet another app. The mixed messaging isn’t all that surprising. Since Covid-19 vaccinations debuted, there’s been ongoing confusion about how people can confirm that they’ve received a vaccine, especially as more companies and businesses have issued their own vaccine mandates. At the same time, private companies have launched a slew of competing apps.

Very cool w this. Question is, can we not just use the Excelsior Pass? Why do we need a separate “Key to NYC Pass?” https://t.co/lzfqFrKhv3

Hell yes, let’s do this!

But also whyyyyyyy will there be yet another digital pass thingy. This one called “Key to NYC Pass” (:-/) is in addition to the existing (terrible) City app and (good but New Yorker only) State app. https://t.co/xcZiJFJfjm

The city’s explanation of the new vaccine requirements even left Recode’s own Peter Kafka confused:

Sooo. This maybe isn’t a new pass after all, just a clumsy and confusing way to describe the use of existing vax IDs – city, state apps and CDC paper cards?

Very on brand for @NYCMayor. https://t.co/XN7ZzJOg1J

New York City’s new program also arrives as the White House eschews a federal vaccine mandate or vaccine passport system. The Biden administration has instead supported private businesses and local governments to move forward with their own vaccine requirements. On Tuesday, just days after she encouraged private companies to take “innovative steps” to promote vaccination, press secretary Jen Psaki told reporters that a federal vaccination mandate is still not on the table. The director of the Centers for Disease Control and Prevention, Rochelle Walensky, suggested last week, however, that European-style health passes could be a “path forward” from the pandemic.

Indeed, the new vaccine mandate for certain indoor activities in New York is bound to reignite the broader conversation about the use of vaccine passports, which have remained controversial in the US. New York, which launched the country’s first state-supported vaccine passport app with the help of IBM in March, has been bullish about the technology. But other states have banned the use of vaccine passports, calling them government overreach and a violation of peoples’ privacy. Norwegian Cruise Line is currently suing Florida’s surgeon general over such a ban.

Vaccine passport programs have found success in other countries, and there’s evidence that these mandates boost vaccination rates. In France, for instance, a new health pass system that requires proof of vaccination for indoor dining, long-distance trains, and malls inspired protests — but also led to record sign-ups for vaccination appointments. Israel and Italy have also enacted similar vaccine passport systems to boost vaccination uptake and curb the impact of the delta variant.

Some private businesses have taken it upon themselves to check customers’ vaccination statuses and even issue vaccine mandates of their own. Last month, a San Francisco alliance that represents about 500 bars announced that its members would require proof of vaccination or a negative test before offering indoor service. The fitness chain Equinox, which also operates SoulCycle, said that all of its customers and employees will eventually be required to show proof of vaccination, a policy that will be implemented at its New York City gyms starting in September.

A growing number of major companies have also announced vaccine mandates for their employees. Google, Facebook, and Microsoft have said that they’ll require workers to prove they’ve gotten inoculated. Disney is requiring all its salaried and non-union employees to get vaccinated within the next two months. Walmart, the largest employer in the United States, announced late last month that its office workers will have to prove they’ve received a Covid-19 vaccine. And Tyson Foods, the second-largest meat processor in the country, is requiring all of its workers to get the shot.

New York City’s new plan comes amid fears that there could be a fourth Covid-19 wave brought on by the delta variant and people moving activities indoors as the weather cools. If one major city shows that vaccine mandates help stop the spread, there’s hope that other local governments will take notice. At the very least, New York City is showing its residents and visitors that getting the vaccine can open doors.