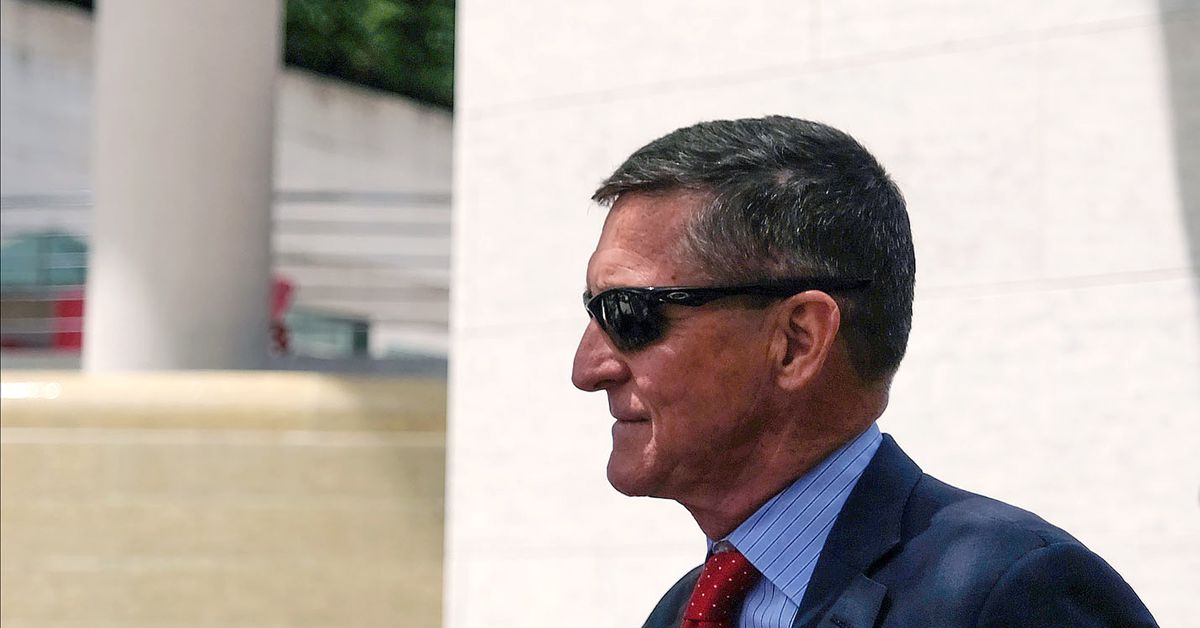 While speaking at a Dallas conference aimed at QAnon adherents on Sunday, former Trump national security adviser Michael Flynn appeared to endorse the idea of a military coup to reinstate Donald Trump as president. A member of the audience asked about the possibility of a Myanmar-style coup in the US, and Flynn said there was “no reason” something similar couldn’t happen in America. He added, “I mean, it should happen here.”

After public backlash, Flynn subsequently declared on the encrypted chat app Telegram that the media had manipulated his words, insisting he actually said there was “no reason it (a coup) should happen here (in America).” Still, experts who follow QAnon say Flynn was parroting a Myanmar talking point that’s been building for months within the QAnon conspiracy theory’s online communities.

Flynn’s comments and the resulting backlash show that messages and conspiracy theories associated with QAnon are still getting some traction, including the false idea that Trump will somehow become president again before the 2024 election. Influencers who continue to promote false QAnon theories related to both the election and Trump’s imminent return to the White House seem to be doing well on Telegram, despite being booted from other social media platforms.

Trump has been telling a number of people he’s in contact with that he expects he will get reinstated by August (no that isn’t how it works but simply sharing the information). https://t.co/kaXSXKnpF0

“They are still 100 percent in support of Biden being removed and Trump returning to office, whether it’s a coup [or] whether it’s some reinstatement which doesn’t exist,” Mike Rothschild, a researcher who has tracked the QAnon conspiracy for several years and author of the book The Storm is Upon Us: How QAnon Became a Movement, Cult, and Conspiracy Theory of Everything, told Recode. “The prophecy of QAnon is now that Trump will be restored to office, and whether that’s through violence or through magic, that’s just what they want to happen.”

Since the January 6 insurrection, QAnon chatter on traditional and social media alike appears to have declined. A recent study from the Atlantic Council’s Digital Forensic Research Lab found that after major platforms including Facebook, Twitter, and YouTube took action against the conspiracy theory, content and language about QAnon has “all but evaporated from the mainstream internet.”

alternative apps such as Telegram, where some QAnon influencers have tens of thousands of followers. That this latest strain of the QAnon conspiracy theory invoking the coup in Myanmar was both previously spread on Telegram and subsequently walked back by Michael Flynn on Telegram demonstrates how the platform has taken on a new importance within the fringe movement.

Discussion of this branch of the conspiracy theory has occurred as part of a broader trend of QAnon followers moving to Telegram. After January 6, extremism researchers noticed the growth of Telegram channels catering to QAnon audiences. Even after President Joe Biden’s inauguration, QAnon activity continued in Telegram groups. Throughout 2021, adherents to the conspiracy theory have used the platform to promote the idea that Covid-19 vaccines are a tool of population control and otherwise dangerous, and some QAnon influencers have used the platform to boost explicitly anti-Semitic conspiracy theories.

“It’s really all happening on Telegram right now,” Rothschild told Recode. “What they’re able to do with Telegram is just sort of blast these messages out on their own private channels and get tens of thousands of views on them right away and get thousands of comments on them. But the discussion is really one-way, so it’s really changing the way QAnon promoters interact with their followers.”

The conference where Flynn made his conspiratorial comments was called the “For God & Country Patriot Roundup” and held at the Omni Dallas Hotel. While the event was largely branded to focus on “patriotism,” it made clear references to the QAnon conspiracy theory, and the event’s logo explicitly invoked the QAnon catchphrase, “Where we go one, we go all.” Other well-known promoters of the QAnon theory also attended, as did Rep. Louie Gohmert (R-TX) and former Trump campaign attorney Sidney Powell, who at one point during the conference said that Trump could “simply be reinstated” and a new inauguration date could be set before the actual next election.

“Flynn’s appearance at this event was not in a vacuum. He has cultivated QAnon support for a while now,” Alex Kaplan, a senior researcher at Media Matters, told Recode. Last year, Flynn posted a video online of himself sharing QAnon slogans, and has formed relationships with influencers in the QAnon movement.

QAnon conspiracy theorists have long believed the November 3, 2020 election was fake, and they’ve circulated the idea that the election was stolen from former President Donald Trump, including through voting fraud, Kaplan explained. Since the inauguration, supporters of QAnon have continued to look for ways to support the idea that Trump is coming back as president. For a while, some adherents thought that Trump would be reinstated on March 4, a belief that has obviously been proven false. Following the February military coup in Myanmar, some QAnon supporters looked to the events as inspiration for what could happen in the US.

“The Burmese military has arrested the country’s leaders after credible evidence of widespread voter fraud became impossible to ignore … sounds like the controlled media and Biden admin are scared this might happen here,” predicted one account on the Telegram app, according to a Rolling Stone report from February. “We will see this headline here soon.”

Some QAnon supporters have even tried to make connections between voting technology companies that were drawn into conspiracy theories about the US election, and the events in Myanmar. Similar claims have also been made on apps like Rumble and Gab.

Right now, it’s not clear what will happen next with QAnon, or where its supporters will go. A recent survey from the Public Religion Research Institute found that while a large majority of the country disagree with the idea that the government, media, and finance is “controlled by a group of Satan-worshipping pedophiles who run a global child sex trafficking operation” — a core belief of the QAnon conspiracy theory — about 15 percent of Americans agree with that idea. Other scholars have questioned the idea that QAnon’s following is actually so widespread.

Regardless, Flynn’s comments and the response to them are a reminder that the future of the QAnon conspiracy theory is more complicated than the content moderation decisions of mainstream social media platforms. While people believed similar conspiracy theories before QAnon arrived, QAnon has managed to repackage many of those beliefs, and they’ve endured and evolved, despite crackdowns.