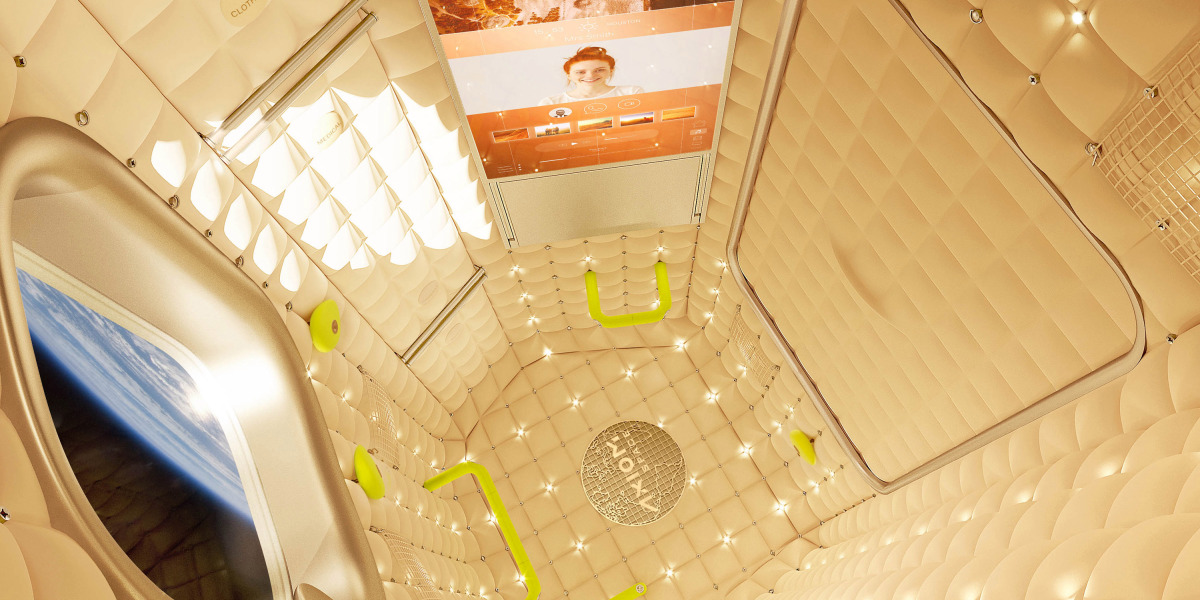 Meanwhile, companies like Virgin Galactic and Blue Origin plan to run much less expensive trips into suborbital space, allowing customers to experience microgravity and a view of Earth for a few minutes. Virgin Galactic eventually plans to run more than 400 flights a year—a mix of tourist trips and missions for scientists running experiments and research in microgravity.

All these new opportunities will make us rethink what astronaut training means. And it means almost anyone will be able to go to space, if you’re rich enough.

Once upon a time, getting a launch ready was a two-year process. The first astronauts selected for the Mercury program had to be military test pilots with college degrees and 1,500 hours of flying time under their belts. They also had to be younger than 40 and shorter than 5 feet 11 inches. The Gemini and Apollo programs were opened up to civilian applicants, raised the height barrier to 6 feet, took applicants no older than 35, and put a bigger emphasis on educational background.

As part of the training for these programs, recruits had to take classes on literal rocket science and spacecraft engineering. They had to learn medical procedures. They had to take public speaking courses and become media ready. Oh, and there was also a bunch of training in the air, on the ground, and underwater designed to physically and mentally prepare astronauts for the stresses and experiences they were about to face.

Even just a couple of decades ago, you needed an almost totally clean medical history to qualify for NASA training. “If you said ‘I get migraine headaches occasionally,’ something benign like that, it was an automatic disqualification—period,” says Glenn King, the director of spaceflight training at the National Aerospace Training and Research (NASTAR) Center, which has trained over 600 people for both orbital and suborbital missions operated by companies like Virgin Galactic.

Future generations of private astronauts won’t have to jump through half as many hoops. The “right stuff” has changed. The FAA has only light safety guidelines around training private astronauts. It’s really up to the companies to approach things as they see fit.

“What we’re looking at now is basically a paradigm shift in space training,” says King. “The private sector is looking at basically everybody in the general public that has a desire and the finances to fly into space to have the opportunity to go.”

“Even to be a NASA astronaut these days, you don’t have to be a finely tuned athletic specimen,” says Derek Hassmann, the director of operations and training for Axiom Space. The agency’s physical requirements are looser than they’ve ever been.

Private companies have taken cues from NASA. King says the NASTAR Center has already started training some private astronauts who have disabilities (something the European Space Agency wants to begin doing for its own astronaut corps). One of Inspiration 4’s confirmed crew members is Hayley Arceneaux, a 29-year-old physician assistant at St. Jude’s hospital who survived bone cancer as a child. Her treatment included a dozen rounds of chemotherapy as well as the placement of a titanium rod in her left thigh bone. It won’t stop her from going into space this fall.

Inspiration 4’s other two travelers will be selected through a raffle and an entrepreneurial contest. People who signed up for the raffle had to attest to being less than six and a half feet tall and under 250 pounds. SpaceX CEO Elon Musk has likened a trip into orbit to “an intense roller coaster ride,” and he says anyone who can handle that “should be fine for flying on Dragon.”

That’s definitely a bit glib. When a giant rocket propels you out of Earth’s atmosphere, you will experience elevated g-forces for several minutes that will cause your body to rattle nonstop, and you probably won’t be able to do anything but stay strapped in with your teeth clenched. But for the most part, what groups like NASA, Axiom, and others consider disqualifying health conditions are things like arrhythmia that could cause heart failure, or high blood pressure that puts you at elevated risk for a brain aneurysm.

These aren’t problems you can treat in space—which could mean severe complications or death. “If there’s any kind of medical conditions that could cause a crew member to get sick or incapacitated on orbit, we try to screen for those things,” Hassmann says. But if flight doctors feel those risks can be properly addressed before flight, they may not be disqualifying.

In June 2019, NASA and its partners announced that the ISS would be opened up to visits from private citizens. For Axiom, this was the opportunity for its astronauts to learn what it’s like to travel into space and live and work in an orbital space station. It plans to launch its own in 2024.

“These missions will allow us to practice all the things we’ll need for the Axiom station down the road,” says Hassmann. Ax-1 will be led by former NASA astronaut Michael López-Alegría. He’ll be joined by three businessmen: Eytan Stibbe from Israel, Larry Connor from the US, and Mark Pathy from Canada.

López-Alegría will be taking his fifth trip into space. He’s had years of professional astronaut training under NASA. The other three are total newbies to space, though Stibbe is a former fighter pilot and Connor (who’s 71) has training as a private pilot. They are paying $55 million each for the ticket.

These three will start training six to seven months before launch. NASA contractors will teach them how to live and work on the ISS, running drills on how to respond to emergencies like a loss of cabin pressure. Certain facilities at NASA and elsewhere can simulate what a decompressed chamber feels like for people in spacesuits. But much of this training is to make sure the astronauts are used to the look and feel of their new habitat. They’ll learn how to do normal day-to-day functions, like preparing meals, brushing their teeth, using the bathroom, and getting ready for bed. It will still take time to adjust to microgravity, but at least they’ll be armed with strategies to make the transition smoother.

“It’s all about the simple stuff that is very different when you’re in microgravity,” says Hassmann. “I’ve worked with a lot of NASA astronauts over the years, and all of them talk about this adaptation period, physically and emotionally, when they first arrive in space. Our crew is only on a 10-day mission. So it’s in everybody’s best interest to prepare them as much as we possibly can on the ground, so that they adapt quickly, and they get down to the things that are important to them.”

The Ax-1 crew will be trained for this environment at Johnson Space Center, where NASA has a full mockup of the ISS interior. They’ll also go on parabolic flights that simulate weightlessness. In the future, Axiom wants to move this type of training in house, and center it specifically on the company’s own space station environment. Other training centers, like NASTAR, run human centrifuge facilities that expose trainees to the elevated g-forces experienced during launch and reentry.

The second part of Ax-1 training will aim to familiarize the astronauts with the Crew Dragon spacecraft, which will take them to the ISS. They’ll get accustomed to what it’s like to sit inside, interact with the panels that control functionality and monitor data, and so forth. This is run by SpaceX primarily out of its facilities in Hawthorne, California. Crew Dragon mostly works autonomously, so the crew members should have to take only a few direct actions on their own. But if anything goes awry, they do need to be prepared to step in. On Ax-1, López-Alegría and Connor will act as the commander and pilot for the mission, respectively, and lead the flight to the ISS. They’ll need to be most familiar with how Crew Dragon works.

About a month before launch, training will move to Florida, closer to the launch pad. The crew will go through a series of dry runs for what launch day will be like, as well as what to expect when they take Crew Dragon back down to Earth and splash down in the ocean.

And finally, there’s mission-specific training, conducted by Axiom. Each member of the crew is looking to do a slew of things while on the ISS—science experiments, social media stunts, publicity activities, and more. “We’ve got a group here at Axiom that works with each of the crew members to design their own orbit plan,” says Hassmann. “A lot of times these individuals don’t know what they can do up there, much less what they’d want to do.”

This doesn’t differ too much from what NASA itself does—but it’s compressed into a much shorter time frame, without a wholesale education in spaceflight. And eventually, Axiom hopes to run most of this training on its own, without any assistance from NASA.

Changes on the horizon

The training regime the Axiom astronauts will be put through is less intense than that for NASA astronauts, but it’s still pretty full-on. But as private spaceflight becomes more common, astronaut training should become more relaxed. That’ll be thanks in large part to spacecraft that basically fly themselves—there are simply not as many systems crews have to interact with. “I would expect that training to continue to evolve and get more efficient,” says Hassmann.

That will also mean more time is devoted to training people for very specific activities and goals during the mission—such as running a certain science experiment or recording a choreographed video. “Training programs have evolved to cover the needs that were not historically present in astronaut training,” says Beth Moses, the chief astronaut instructor for Virgin Galactic. “Today people are buying time in space, selecting what they will do there, and they need bespoke training to enable that.”

These things should help encourage another important trend: shorter and shorter training. “Right now we’re starting to shift away from the old paradigm of gigantic NASA-style two years of training to qualify as an astronaut,” says King. “I think the commercial industry can get this down to days of training. I think that’s where the industry is going to start heading.” That will be practically a requirement if companies like Virgin Galactic and SpaceX are serious about conducting dozens or hundreds or crewed missions into space every year.