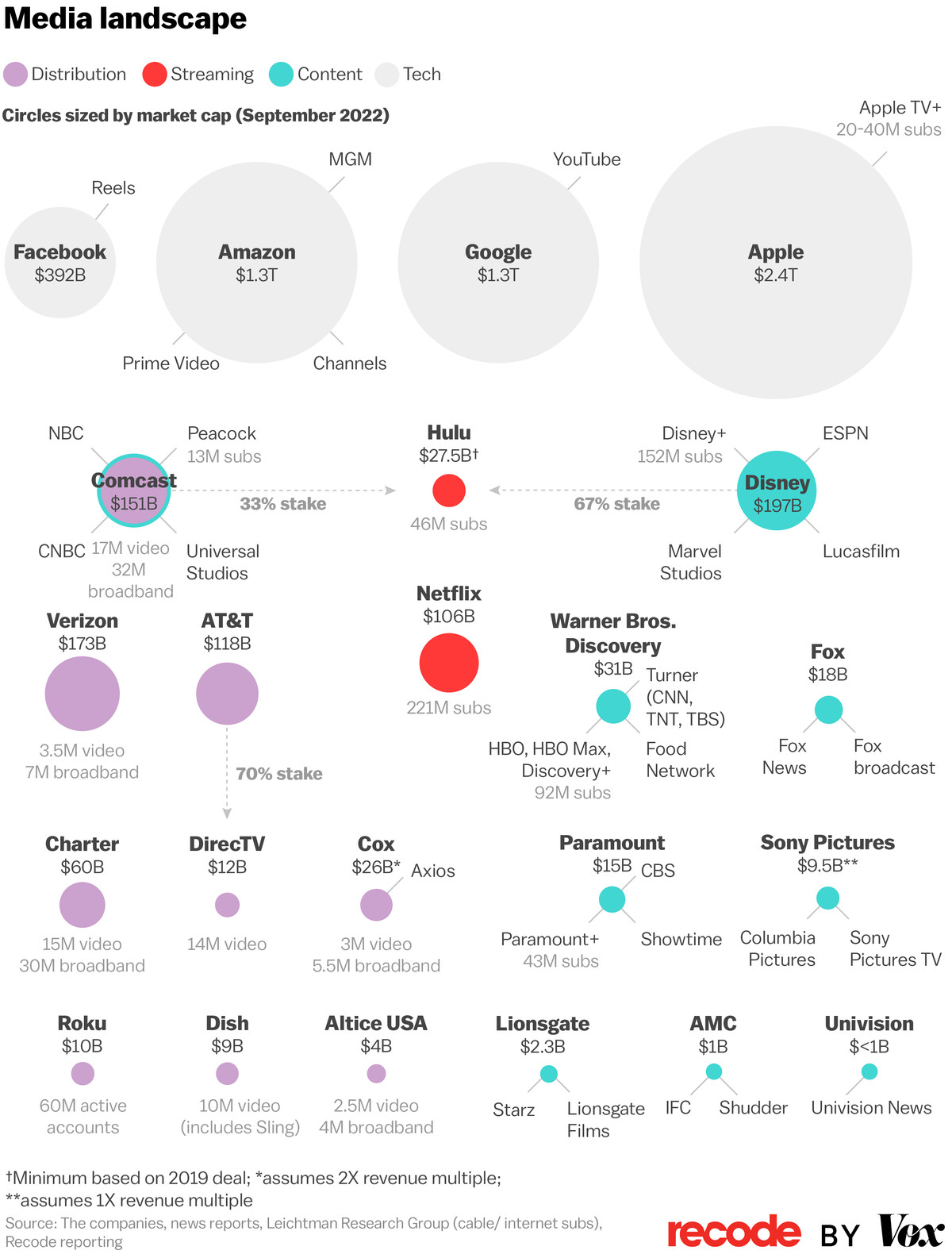 In the very, very old days, TV was simple. There were three channels, you sat on your couch, and you watched whatever they showed you.

That’s all different now, and much more complicated. Also more complicated: Figuring out which media or tech conglomerate owns the rights to the shows and movies you want to watch. We write about this stuff for a living, and we still get confused about it.

Which is why we’ve produced the map below, which sketches out the relative size, power, and relationships between the companies that make, own, and distribute the stuff we watch at home, on our phones, and even sometimes in a theater.

We’ve been making this one for four years. And each time we’ve created a new edition, we’ve promised that the map would continue changing, and it certainly has this time around.

Wall Street, which used to love Netflix, is now much more ambivalent about streaming, so Netflix’s value has dropped dramatically.

And every media company that has been chasing Netflix by trying to create its own high-growth, low/no-profit streaming service has seen its value fall as well. In 2016, for example, Time Warner was worth $85 billion plus debt to AT&T; now the company that used to be called Time Warner has been handed over to the Discovery cable networks, which has a combined value of only about $30 billion.

The other major change is one we’ve made at the request of many of our readers, who rightfully argue that the giant tech platforms — Amazon, Apple, Facebook, and Google — are media companies. So we’re including them in this year’s edition, even though there are massive differences in the way those companies approach media. Amazon, for instance, treats media as a (very expensive) sidelight — a way to convince people to subscribe to its Prime shopping service. Meanwhile, YouTube is a key component of Google/Alphabet’s core advertising business. The main takeaway: These giants make the biggest media companies look tiny. (And yes, we should probably include TikTok next time.)

Our warning/advice/promise still holds, by the way: There will be more changes to come on this map, chiefly via consolidation. It is now conventional industry wisdom, for instance, to believe that Warner Bros. Discovery will end up combining with Comcast’s NBCUniversal in the next couple of years. And smaller players like AMC Networks and Paramount are constantly described as acquisition targets.

That said, it’s not entirely clear who would do the acquiring, given that any big tech acquisition of a major media outlet will draw lots of regulatory scrutiny. (It may be telling, for instance, that Amazon bought MGM — a media company that doesn’t own TV networks and has a low consumer profile. And the Biden administration still raised several eyebrows about that deal before letting it go through this year.) And combining two smaller media companies just gets you a … slightly bigger media company.

So yes, this map will change … somehow, sooner or later. We’re just done predicting how it’s going to change.

Click here to see a version of this graphic optimized for mobile.