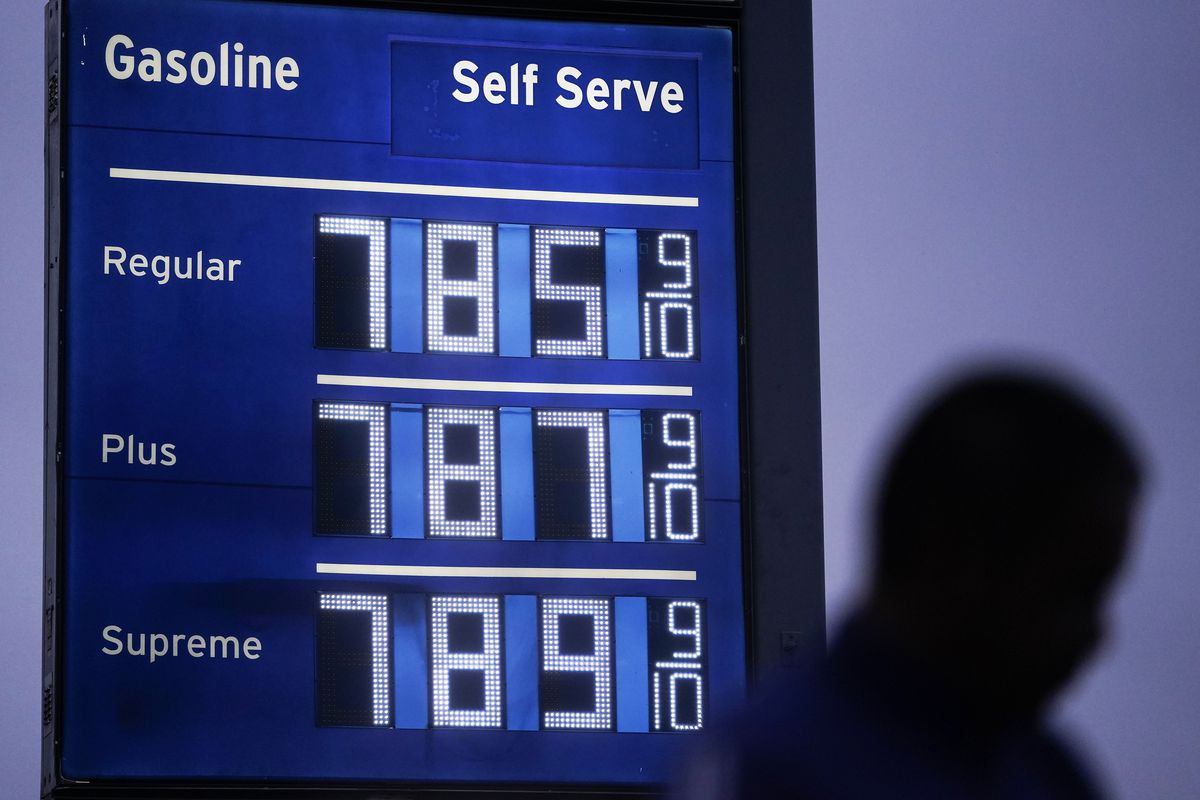 Back in February, when US gas prices were around $3.50, most Americans said they’d change their driving habits or lifestyle if gas hit $4. It now costs just under $5 on average.

In the short term, high gas prices have meant that some people have become more conscientious about how often they drive. But for those who have to drive for work, either as a commute or as part of their job — like health care workers, farmers, tradespeople, and Uber and Lyft drivers — there’s less wiggle room. For them, sustained high gas prices have long-reaching repercussions that affect their take-home pay, where they live, and if they’ll be able to perform their jobs at all.

“If they’re required to drive as a condition of their livelihood, they’re stuck,” Mark Cohen, director of retail studies at Columbia Business School, told Recode. For those people, increased gas costs will come out of their discretionary income, the same way clothing and trips do. If they are low-income and had limited extra money to begin with, that can mean much harder choices about food, housing, and debt.

People who live paycheck to paycheck “are definitely seeing this have an enormous effect on what’s left in their wallet,” Cohen said.

In May of this year, the average transaction price at gas stations was up 34 percent from May 2019, according to Earnest Research, a company that analyzes anonymized US credit and debit card data. And those charges are taking up a larger share of people’s spending in the US.

For now, the bad news is that there’s not much the government can do to adjust gas prices since they’re due to large global events outside government control. When the pandemic in 2020 began causing travel of all kinds to grind to a halt and demand for gas plummeted as a result, oil companies closed down refineries that process oil into gas — a move that’s not easy to quickly reverse, even as demand for gas in the US has grown again. Additionally, the war between Ukraine and major oil producer Russia has caused prices for crude oil — which are set on a global basis — to soar. As a result, analysts expect gas prices to grow to $6 a gallon this summer and remain high for some time.

New research shows that demand for gas is more elastic — meaning demand does change as prices go up — than previously thought. That said, it’s most inelastic among people or small businesses that have no choice but to drive.

“They could get more efficient, they could pass it on to customers, or they can eat it,” said Adie Tomer, a senior fellow at public policy nonprofit Brookings Institution who leads its Metropolitan Infrastructure Initiative.

Tianna Kennedy, owner of The 607 CSA, which delivers produce, meats, dairy, and other goods from farms in upstate New York to subscribers nearby and in New York City, is trying to make changes where she can.

The CSA already cuts down on gas mileage for its 40 member farms by consolidating their deliveries and bringing them to pick-up points where subscribers live. But part of the organization’s mission is to bring fresh food to low-income people in poorer, more far-flung neighborhoods in the Bronx and East New York, rather than just wealthier areas in Manhattan and Brooklyn.

“We’re intentionally inefficient,” Kennedy said. “It’s a lot of driving, so it gets really expensive.”

She doesn’t want to raise the fees to farmers, who already don’t make much on their goods, and she doesn’t want to pass it on to customers, so she hasn’t raised the prices of food shares. Kennedy is in the process of transitioning her business into a nonprofit to try and make things work.

Others are raising prices, but it’s a delicate dance.

Brian Stack, president of Stack Heating Cooling & Electric outside Cleveland, Ohio, says the gas bill for his shop’s 40 trucks is now $20,000 a month — that’s double what it has been in recent years — so he’s had to raise prices.

In addition to other inflation costs — he’s now paying fuel charges from his suppliers and has offered salary increases to workers to help them deal with that inflation — Stack said gas prices are eating into the company’s bottom line. Service calls are often unscheduled and urgent — like when someone’s heat isn’t working in winter — so it’s largely impossible to optimize routes for better gas mileage.

“I need the trucks to generate revenue,” he said. “Without them, we’re out of business.”

Some people who drive for a living, like truck drivers working for large outfits or project managers who do site visits in their own cars, have company gas cards or are paid or reimbursed based on gas spending, but that’s not always the case. Uber and Lyft drivers, for the most part, have to take it on the chin.

That’s bad news for the companies and the people who work for them.

In March, when gas was around $4 a gallon, Lyft and Uber added small surcharges to each trip — 55 cents for Lyft, 45 to 55 cents for Uber — to help drivers offset gas prices, but the companies haven’t raised that fee since. Even then, the fee wasn’t enough for drivers like Hector Castellanos.

“It’s an insult,” said Castellanos, who works in the Bay Area where gas is now nearly $7 a gallon.

His Chevy Malibu gets around 30 miles per gallon, but he says the trips are often long, upward of 20 miles. That means the surcharge only helps with a small portion of the trip. Castellanos works 12-hour days where he earns roughly $300. After spending $120 a day on gas — but before car maintenance, insurance, and cellphone costs — he makes $180. In an area with a very high cost of living, that means he faces hard decisions about what he can afford.

“Now we need to think about what are we going to eat,” said Castellanos, who is currently applying for jobs in food service where he thinks he’ll make more. “Everything is so expensive.”

very few levers to pull to help with gas prices, and some of the things the Biden administration is doing are more symbolic than effective.

The Federal Reserve has already raised interest rates, a painful process that tries to slow down spending by making borrowing more expensive, which is supposed to make costs go down. While that could help with demand, aiding with supply is much harder since that’s tied to refinery capacity and global oil prices (and geopolitical whims).

Biden has already released fuel from the country’s emergency stores, a move that has done little to ameliorate gas prices since it can’t make up for declines at the global level, where oil prices are set.

On Wednesday, Biden announced he’s also asking Congress to suspend federal gas taxes for three months. Some states have already paused their gas taxes as well. But those state and federal taxes only account for 12 percent of the cost of gas.

“The price is already five bucks; 20 cents isn’t going to make a huge difference,” Kyle said, referring to how much federal taxes are per gallon.

Additionally, those taxes would normally help pay for road and highway improvements — stuff that will eventually have to be paid through other taxes.

Lutz Kilian, a senior economic policy adviser at the Federal Reserve Bank of Dallas, said such moves to lower gas prices could in fact have “perverse effects” on prices because making gas less expensive could increase demand, which in turn would cause prices to grow. “It could make things worse,” he said.

In the short term, many American workers will have to grit and bear the high price of gas. In the long term, they could make changes, which aren’t easy and will take time.

“In the short run, they have the car they have and they have the job they have,” Steven Kyle, an associate professor at Cornell University’s Dyson School of Applied Economics and Management. In the longer run, these people could switch jobs and move to different industries.

“We’re going to see those kinds of professions depopulate — people are going to leave if they can’t afford the cost-revenue calculation,” Kyle said. “That will eventually make [employers] have to pay those people more, but all of these things take a while to work out.”

Those who can afford it could buy electric and fuel-efficient vehicles, though bottlenecks for EV supplies are putting a damper on this transition.

High gas prices might also affect where people live, causing those who work in-person to ensure they live close to their jobs. It could also accelerate the demand for remote work. In April, 20 percent of jobs on LinkedIn in the US were for remote work, but they received more than half of all applications, according to the company. Those who are coming into the office two or three times a week might ask their bosses if they could come in once a week or even a few times a month — especially since many office workers aren’t convinced there’s a point to going into the office at all.

Early indicators suggest that high prices could be starting to keep people from fueling up, which in turn could help drive down prices: There were 5 percent fewer gas station transactions in May 2022 than in May 2019, according to Earnest Research, and Energy Information Administration data shows that implied demand for gasoline in the week ending June 10 shrank slightly from a week earlier and from the same week a year before.

Even still, gas prices are expected to rise this summer and not substantially decline till 2023. And the longer gas prices stay high, the more drastic will be the changes workers have to make.