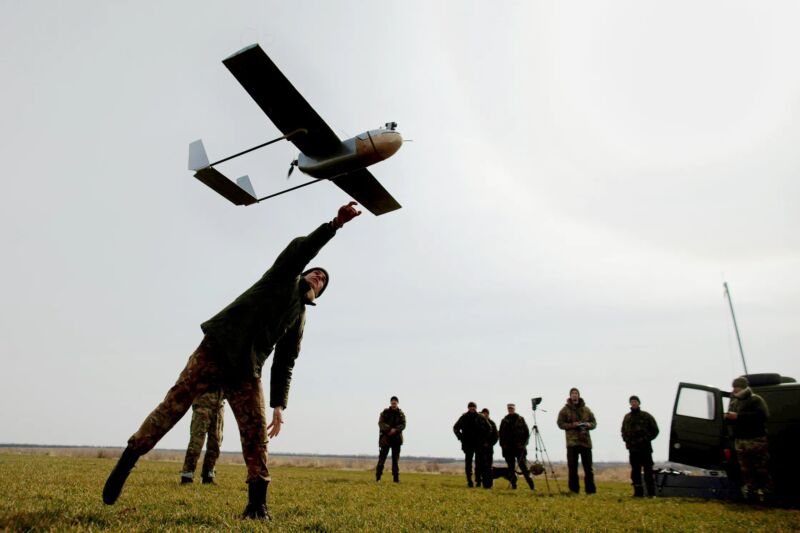 In the snowy streets of the north Ukrainian town of Trostyanets, the Russian missile system fires rockets every second. Tanks and military vehicles are parked on either side of the blasting artillery system, positioned among houses and near the town’s railway system. The weapon is not working alone, though. Hovering tens of meters above it and recording the assault is a Ukrainian drone. The drone isn’t a sophisticated military system, but a small, commercial machine that anyone can buy.

Since Vladimir Putin invaded Ukraine at the end of February, drones of all shapes and sizes have been used by both sides in the conflict. At one end of the scale are large military drones that can be used for aerial surveillance and to attack targets on the ground. In contrast, small commercial drones can be flown by people without any specific training and carried around in a suitcase-sized box. While both types of drones have been used in previous conflicts, the current scale of small, commercial drone use in Ukraine is unprecedented.

Drone videos shared and posted to social media depict the brutality of the war and reveal what has happened during battles. Drones have captured fighting in the destroyed Ukrainian city of Bucha, with lines of tanks moving around streets and troops moving alongside them. Commercial drones have helped journalists document the sheer scale of destruction in Kyiv and Mariupol, flying over burnt-out buildings that have been reduced to rubble.

shooting at citizens holding their hands in the air. Drone videos show Ukrainian troops shelling Russian positions, monitoring their movements in real time, and ambushing Russian troops. In one video, a drone spots Russian military vehicles leaving troops behind—they run after the transport and fall in the snow. In another, the drone hovers in the air and records a helicopter being shot down as it flies past.

“Drones changed the way the war was supposed to be,” says Valerii Iakovenko, the founder of Ukrainian drone company DroneUA. “It is all about intelligence, collecting and transferring data about enemy troops’ movements or positionings, correcting artillery fire. It is about counter-saboteurs’ actions, and it is of course search-and-rescue operations.” Iakovenko estimates that Ukrainian forces are operating more than 6,000 drones for reconnaissance and says these can link up with Elon Musk’s Starlink satellite systems to upload footage. “In 2014, drones became the center of attention of intelligence units, but their scale cannot be compared to what we see today,” he says. (Russia first began its invasion of Ukraine in 2014 with its annexation of Crimea.)

Both Ukraine and Russia have used military drones during the war—and Ukraine received donations of drones from the US. These military drones can often fly at high altitudes for long periods of time and fire upon targets, including ships. However, the use of smaller commercial drones in such high numbers stands out, researchers say. These drones, which can sometimes be flimsy and can’t fly far from their operators or stay in the air for long periods, have provided tactical advantages in some cases. (Commercial drones have been used in previous conflicts, for instance in Syria, but not as extensively as in Ukraine.)