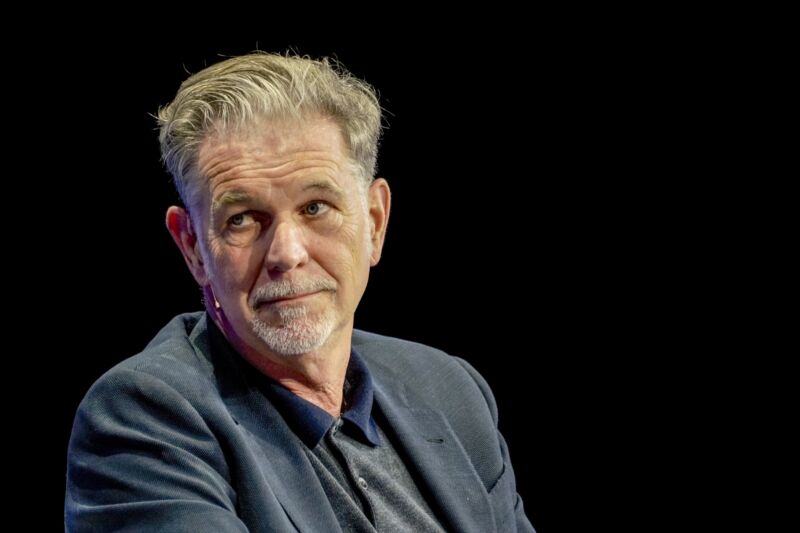 Netflix plans to launch a lower-priced subscription tier with ads, CEO Reed Hastings said Tuesday in an interview to discuss first-quarter earnings. Netflix revenue growth is slowing amid a loss in subscribers, and the company’s stock price was down about 37 percent Wednesday as of this writing.

Hastings said that an ad-supported tier is something “we’re trying to figure out over the next year or two” and that Netflix is “quite open to offering even lower prices with advertising as a consumer choice.”

“Those who follow Netflix know I’ve been against the complexity of advertising and a big fan of the simplicity of subscription,” Hastings said. “But as much as I’m a fan of that, I’m a bigger fan of consumer choice, and allowing consumers who would like to have a lower price and are advertising-tolerant get what they want makes a lot of sense.”

When asked if Netflix will test an ad-supported plan in small markets before a global rollout, Hastings suggested he doesn’t think that will be necessary. “No, I think it’s pretty clear that it’s working for Hulu. Disney’s doing it; HBO did it. I don’t think we have a lot of doubt that it works. You know that all those companies have figured it out. I’m sure we’ll just get in and figure it out as opposed to test it and maybe do it or not do it.”

When Netflix adopts ads, “it would be a plan layer like it is at Hulu so if you still want the ad-free option, you’ll be able to have that as a consumer. And if you’d rather pay a lower price and you’re ad-tolerant, we’re going to cater to you also,” Hastings said. Netflix prices in the US currently range from $9.99 to $19.99 a month.

Update at 4:30pm ET: Netflix stock was down 35.12 percent when the market closed today.

charging an extra fee of about $3 to users who share accounts with people in other households, with the fee rolling out first in Chile, Costa Rica, and Peru.

“[I]n addition to our 222 million paying households, we estimate that Netflix is being shared with over 100 million additional households, including over 30 million in the UCAN region [US and Canada],” Netflix said in its letter to shareholders Tuesday. The letter said that Netflix is planning “more effective monetization of multi-household sharing.”

Netflix said that “account sharing as a percentage of our paying membership hasn’t changed much over the years,” but it’s becoming a bigger focus for the company as it struggles to grow its subscriber base. Hastings discussed plans to tackle account sharing without offering much detail:

We’re working on how to monetize sharing. We’ve been thinking about that for a couple of years, but when we were growing fast, it wasn’t a high priority to work on, and now we’re working super hard on it. Remember, these are over 100 million households that already are choosing to view Netflix. They love the service; we’ve just got to get paid at some degree for them.