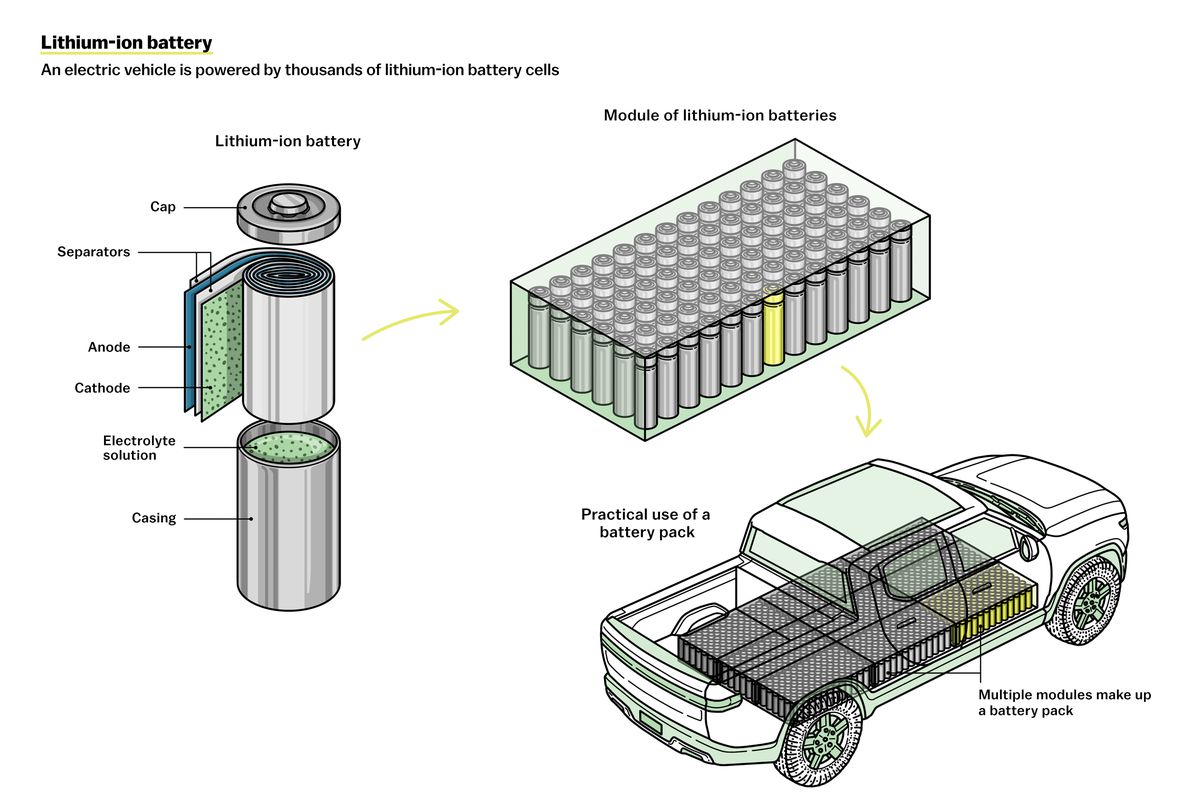 This story is part of Recode by Vox’s Tech Support series, which explores solutions for our warming world.

When consumer lithium-ion batteries debuted in the 1990s, they were revolutionary: They recharged in a few hours or less and made our modern computers and phones truly portable. But three decades later, this battery technology is due for a major upgrade, since the harsh reality of climate change means that lithium-ion batteries don’t just need to power our devices, but our cars, too. That’s a lot harder.

Lithium-ion batteries became the go-to form of energy storage because they have an extremely high energy density, which means they can store a lot of energy within a relatively small volume. Lithium itself is the lightest metal on the periodic table, which makes lithium-ion batteries extra portable. As the technology has been incorporated into electric vehicles (EVs), though, these batteries have been pushed to their limit.

They can only be charged and discharged so many times, and we may have hit the upper limit of their storage capacity. This is one of the biggest concerns that people have with EVs since more capacity equals a longer driving range. Batteries also take up a huge amount of space in the cars that we already have, which means we can’t just add more batteries to get more range.

So, if this EV revolution is going to succeed, batteries need to get better. They need to go even farther on a single charge, and they need to weigh less. EV batteries also need to be less prone to bursting into flames, an issue that’s rare but very concerning. (Gas and hybrid cars have fire risks, too.) Chevy recently had to recall every Chevy Bolt it had ever sold due to battery fire risk. The lithium-ion batteries in cars today could benefit from new base components, too. They’re currently made from scarce materials, like cobalt and nickel, that are increasingly expensive.

The race to address these problems is speeding up. Longtime battery manufacturers like CATL and LG Energy Solution are rethinking the fundamental chemistry of batteries so that they work better in EVs. Meanwhile, Ford and GM are investing in new battery research, hoping to get an edge over Tesla. Even the government is getting involved: In March, President Joe Biden invoked the Defense Production Act — a 1950 law that allows the president to boost domestic production of certain products in an emergency — to increase the country’s supply of the rare metals and materials used in EVs.

This is all well and good, but time is of the essence. Climate change is only accelerating, and every new car that runs on fossil fuels stands to exacerbate the threat. Luckily, better battery technology isn’t just in development; it’s starting to come to market.

EVs aren’t powered by one big battery but rather thousands of smaller cells. Each cell has four key components that make up a battery: an anode, a cathode, a separator, and an electrolyte, which is usually a liquid. To power a device like a car, charged atoms or molecules called ions move from the anode to the cathode through the electrolyte, releasing their extra electrons along the way and producing electricity. To charge a battery, the opposite happens: Electrons flow into the battery, and the ions flow back from the cathode to the anode, creating potential energy that the battery can later discharge.

Lithium-ion batteries aren’t exactly perfect for EVs, however. Beyond the unlikely but real risk of bursting into flames, the average electric vehicle has a range of 260 miles. That’s enough to get around for day-to-day trips, but makes a lot of drivers worried about longer-range excursions.

Lithium itself has some problems, too. Lithium mining isn’t particularly environmentally friendly, and right now, the world doesn’t have enough lithium mines to supply enough material for the number of EV batteries that we probably need. There are also mounting concerns with other metals commonly used in lithium-ion batteries — namely cobalt, which is primarily extracted in the Democratic Republic of Congo and is linked to child labor and human rights concerns.

A relatively straightforward way to build a better battery involves incorporating different materials into the conventional lithium-ion technology. New materials come with their own benefits and drawbacks, and some combinations might be better for electric vehicles than others.

One of these combinations is called a lithium iron phosphate battery, which incorporates lower-cost materials into the battery’s cathode. While these batteries can’t pack in quite as much energy as other lithium-ion batteries, they allow automakers to build more batteries for less money and, thus, offer more EVs at a lower price. Lithium iron phosphate batteries are already widely used in China, and Tesla announced last fall that it would start using this chemistry in its standard-range vehicles.

Another approach changes up the materials in the battery’s anode. Many lithium-ion batteries currently have anodes made with graphite because it’s relatively cheap and lasts for a long time. But a handful of startups are instead using silicon, the same stuff used to make computer chips. Batteries with silicon anodes can hold 10 times as much charge as anodes made of graphite, and boost a battery’s overall energy capacity. Companies like Sila Nanotechnologies, NEO Battery Materials, and Enovix are currently perfecting their designs.

Solid-state batteries still face some real roadblocks. They’re expensive and difficult to mass manufacture, so they’ve primarily shown up in laboratories so far. Another challenge is that many solid-state battery designs have an anode made of lithium metal, instead of graphite. This lithium metal sometimes forms dendrites, branches of metal that leak from the anode and into the electrolyte, which can cause a solid-state battery to crack and short circuit.

That doesn’t make these batteries a dead end. They’ve already been incorporated into some pacemakers, earphone prototypes, and other electronic devices, and now auto giants are researching how to adjust the tech so that they can eventually work in cars, too. There are already some encouraging signs of progress: Volkswagen, Ford, and Stellantis have all invested in the technology. Toyota plans to release a hybrid vehicle that uses a solid-state battery by 2025, and Nissan hopes to launch an EV that uses solid-state batteries by 2028. Another company called QuantumScape has shared research suggesting that a solid-state battery can work — and charge faster than other batteries — when it’s combined with another idea: a battery that doesn’t need an anode at all.

Eventually, lithium-ion batteries may not look like batteries at all. They might just become a part of what they’re powering. That’s the idea behind structural batteries, which would have a battery double as another part of a vehicle, like the body of a car or the fuselage of a plane.

This could address a fundamental challenge with batteries, which is that they’re incredibly large and heavy. Allowing a vehicle part to also serve as an energy source could, theoretically, cut down on an EV’s overall size. It would also mean, potentially, using fewer raw materials overall.

This concept is gradually being incorporated into vehicles that are already on the road. Tesla has designed a new structural battery that will directly attach to the seats inside of its Model Y vehicle. Volvo, similarly, plans to cut down on their batteries’ footprint by designing them to also support the floor of their cars, and GM is already rolling out EVs that use batteries to reinforce their vehicles’ chassis. These might sound like small adjustments right now, but they could pave the way to cars that are entirely powered by their own frames, and possibly even planes, too.

The battery boom is getting even bigger

Powering vehicles will be a herculean task for batteries, but it won’t be the only one. In order to transition away from fossil fuels, we need to use renewable energy sources, like solar and wind energy. But because the sun and the wind aren’t always around when we need power, we need to store the energy that they provide for when we need it. That means our homes, cities, and even the electric grid will need batteries, ones that are really, really big.

At least for the time being, anyway. It’s certainly possible that in the future, we could be powering our cars with futuristic fuels, or maybe even portable nuclear reactors. But all signs indicate that these technologies won’t be ready soon. For now, the battery is the best we’ve got.