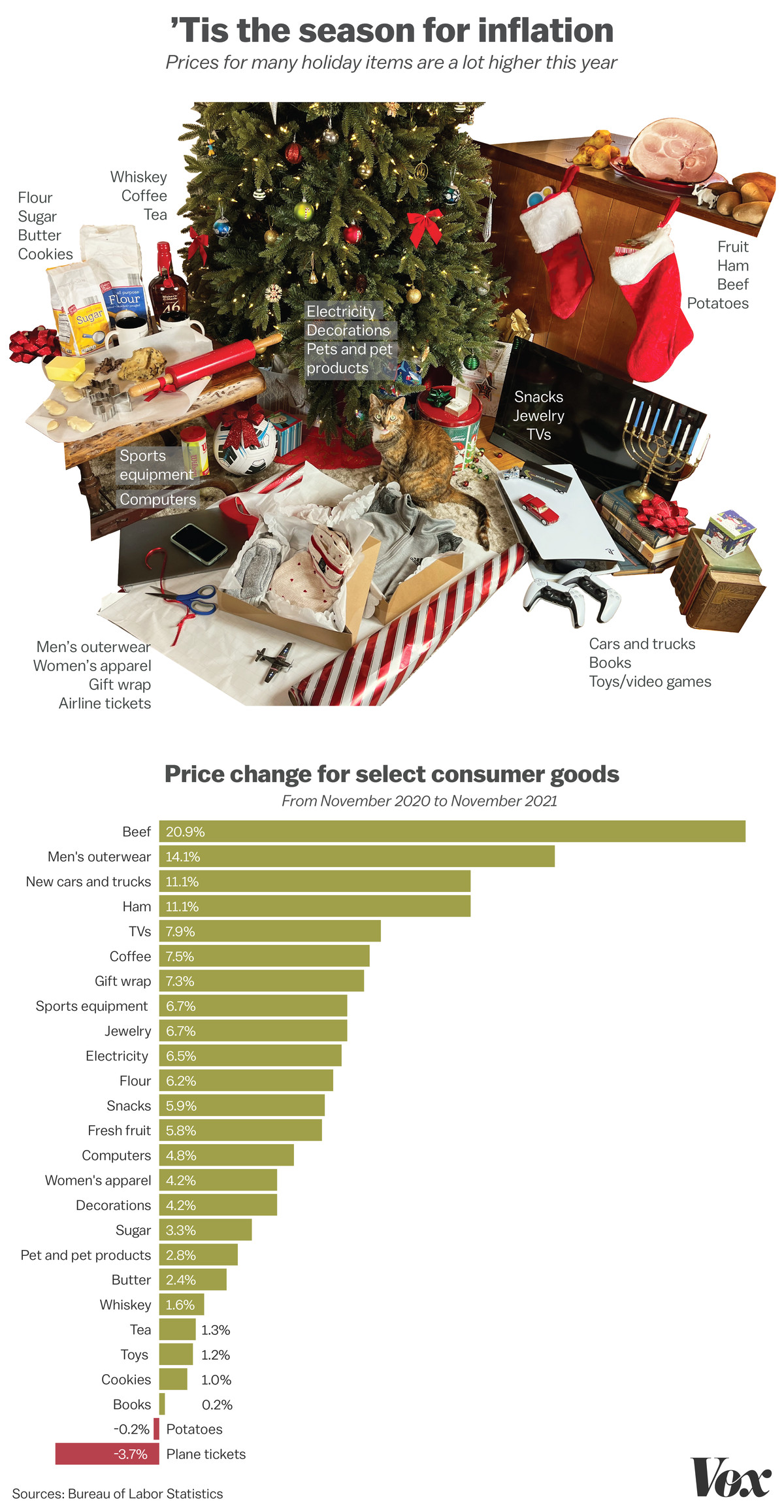 This year’s holiday season will likely feel more normal than last. It’s also going to be more expensive, essentially across the board.

You’ve probably noticed prices creeping up in many areas of your everyday life — at the grocery store, at the gas station, at the retailer where you’re buying holiday gifts. In the United States and in many parts of the world, inflation is running higher now than it has in recent decades thanks, in part, to supply-demand mismatches, supply chain kinks, and a generally weird economic moment. Many economists and policymakers say it’s still not time to panic and that much of what’s going on is temporary, while others are sounding the alarm.

Whatever the case, the current landscape is pretty clear: December 2021 is going to cost you more than December 2020. And at a time of the year when many people are buying more, it’s not ideal.

Consumer prices were up 6.8 percent from the previous year in November, according to newly released data from the Bureau of Labor Statistics’ Consumer Price Index, which looks at prices for goods across the economy to get an idea of inflation. It’s the biggest jump in nearly 40 years. Prices rose by 0.8 percent from just a month earlier. There were price increases virtually across the board, with the most notable increases in gas, shelter, food, and new and used cars and trucks.

And inflation across all items purchased on the internet was at its highest rate ever recorded, up 3.5 percent in November compared to the same month in 2020, according to Adobe, which analyzes consumer transactions online.

Despite rising prices, consumers are still shopping, though many of them are shopping a little differently. It appears people are spreading out their spending across the season a little more, and some shopped earlier, meaning they weren’t hitting the stores as much as years past on, say, Black Friday. Given the countless headlines about supply chain delays and shortages, it’s understandable that people would want to hurry up.

“Even though consumers are noticing prices are rising and they’re complaining about it, it’s not stopping them from shopping right now,” said Dana Peterson, chief economist at the Conference Board, a nonprofit research group.

So just how much more are this year’s festivities going to run you? To a certain extent, it depends what you’re spending on. But by and large, this holiday season is going to feel more expensive — because it is.

Your holidays are going to be pricier this year than last

The price of toys, clothes, sporting goods, and basically any type of gift you can think of is up compared with a year ago. Even wrapping paper and cards will cost 7.3 percent more than this time last year, according to the BLS. If you’re in the market for a vehicle this holiday season, that will cost you too (prices on vehicles have been up all year). The price of new cars and trucks is up 11.1 percent from last year; the price of used cars and trucks has increased by 31.4 percent.

Holiday meals will be costlier as well, as the price of food is up by 6.1 percent. The price of meat has increased by 12.8 percent, and beef, specifically, is up by 20.9 percent.

If you’re doing a lot of driving to holiday parties or to see family this season, gas prices are going to sting. (They’ve probably already been stinging in your daily life, anyway.) According to AAA, the national average for a gallon of gas right now is $3.34. A year ago, it was $2.16.

There are a variety of factors in play here. Demand fell significantly when the pandemic hit, but as life has gotten back to more normal after the wide availability of vaccines, demand has surged. Supply, on the other hand, hasn’t. OPEC and its major oil-producing allies are gradually increasing oil production, but not at the fastest possible pace. “Until they’re back at pre-Covid production and until other oil producers, like the US, are producing, we have an imbalance that is squeezing us at the pump,” said Patrick De Haan, head of petroleum analysis at GasBuddy.

The White House has taken steps to try to bring down gas prices, but there’s not a ton the US government can do. “Politicians are powerless against supply and demand,” De Haan said. He expects gas prices will come back down as oil prices settle, but it will be a minute before consumers see notable changes at gas stations. “They will pass the decrease along,” De Haan said, “but it takes time.”

Heating your home for your holiday party will also be vastly more expensive than last year, with prices on fuel, including oil, propane, and firewood up a whopping 48 percent.

A bit of good news, price-wise: Plane tickets are cheaper. According to the BLS, airline fares have fallen by 3.7 percent since last year.

An ongoing computer chip shortage — as well as labor shortages and shipping delays — is making everything from pickup trucks to smartphones harder to come by, and by extension, more expensive. The Bureau of Labor Statistics said the price of smartphones was down 16 percent in November, but IDC, a market intelligence firm that specializes in smartphone shipping data, says that prices are actually up about that much, as supply chain issues have caused manufacturers to prioritize their more expensive models. Retailers are using the shortages to hawk paid subscriptions to their own membership programs like Walmart+ and Best Buy Totaltech that promise early access to hard-to-find electronics, like the PlayStation 5 and Xbox Series X.

Even Christmas trees, fresh and fake, are pricier this year, thanks to increased demand, as well as drought and high heat this summer that damaged supply. Consumers can expect to pay 10 to 30 percent more for Christmas trees this year, and will have to choose from a smaller selection than in previous years.

Out of stock for the occasion

Most people have never thought more about the supply chain than they have in the past two years. Delays and problems in the system are causing price increases and shortages in a wide variety of sectors, from turkeys to vinyl records to used cars. Retailers and the media have for weeks warned consumers to buy their holiday gifts early, lest they find themselves facing empty virtual and in-store shelves.

Patrick Penfield, a supply chain management professor at Syracuse University, explained that while many retailers were able to stock up early in the season, the problem is the replenishment orders once items run out. Big-box stores, such as Walmart and Target, have said they believe they’re stocked up for the season. It’s smaller retailers that could have a hard time getting more products, Penfield said, or really struggle to pay the higher prices for them. “You can bring stuff in overnight, but it’s going to cost you,” he said. “The problem is how much margin do you want to give up.”

Adobe. The share of these messages relative to in-stock messages rose 258 percent in November compared with the same month in 2019. At the same time, online sales growth remained strong, growing nearly 14 percent to $114 billion in November. Adobe expects the out-of-stock trend to continue through all of December.

The prevalence of these messages is contributing, in part, to prices going up for goods online, since limited availability means consumers are having to settle for higher prices. That’s led to prices increasing online over time, where traditionally they go down over the course of the holidays.

“The old adage for people is that, ‘I can get it online and I can get it cheaper,’ and those things have been completely turned on their head,” Vivek Pandya, a senior digital insights manager at Adobe, said.

What people can’t find new online, they are finding used.

The value of goods sold on eBay rose nearly 10 percent in the third quarter of 2021 compared to the same period before the pandemic. In November, the company saw double-digit growth in its watches, handbags, and Certified Refurbished categories compared to a year earlier.

“We’re seeing scarcity having a significant impact on consumer shopping behavior and that consumers are actually shopping differently — taking a more open-minded approach to the type of inventory they’re buying,” Jordan Sweetnam, senior vice president and general manager of eBay North America, told Vox in an email. “Now more than ever, people are turning to eBay for things they can’t find anywhere else.”

Over time, current supply chain issues should settle as demand returns to more normal levels and the supply side catches up. Major ports say things are getting better, but there isn’t an overnight fix. It took the supply chain years to get to where it was in the first place — well before the pandemic.

“The problem started long before Covid; Covid just exposed the problem,” said Pedro Reyes, a professor and supply chain expert at Baylor University, pointing to the rise of the practice of factory offshoring dating back to the 1990s and 2000s. “It gave the responsibility to somebody else, so companies no longer have control of their supply chain when they outsource, or they give up some, and the risk increases.”

it’s not stopping them from shopping for the holidays. According to a survey from the Conference Board from October, consumers are poised to spend an average of $1,022 on holiday gifts and related items this holiday season, with $648 going toward gifts and $374 being directed elsewhere. The gift spending is slightly down from 2019 and 2020, but that could be because people expect to spend more on socializing costs and are rebalancing their budgets a bit for that.

People are adjusting their shopping habits, though, some in ways that are more expected than others. It appears that some consumers pulled their shopping forward a little and bought earlier in the season rather than later — a trend encouraged by some retailers. About 4 in 10 consumers had already purchased holiday gifts by October, largely due to concerns around supply, according to a survey by NPD group.

Essentially, Black Friday may not have been as big of a deal this year as in years past, but there are instead a lot of mini Black Fridays across several weeks.

Conference Board’s survey found that gift cards are expected to see the biggest increase in spending, followed by footwear and apparel. “When you’re buying a gift card, you’re putting a dollar value on that, and you’re leaving it up to the other person to spend it,” Peterson said. She added that the rise in gift card giving could help extend the holiday shopping season into January.

There’s a lot of uncertainty going into this holiday season, just as there was in 2020. The economy is getting better, with people getting back to work and stimulus efforts having helped boost people’s savings, but the recovery continues to be a bumpy one. The pandemic isn’t over, and there’s a lot we don’t know about the new omicron variant. The future of the economy has always been contingent on how the public health crisis unfolds.

Still, there are many Americans who will be celebrating the holidays much more safely this year than last. And even if it’s a little more expensive, maybe that’s worth it.