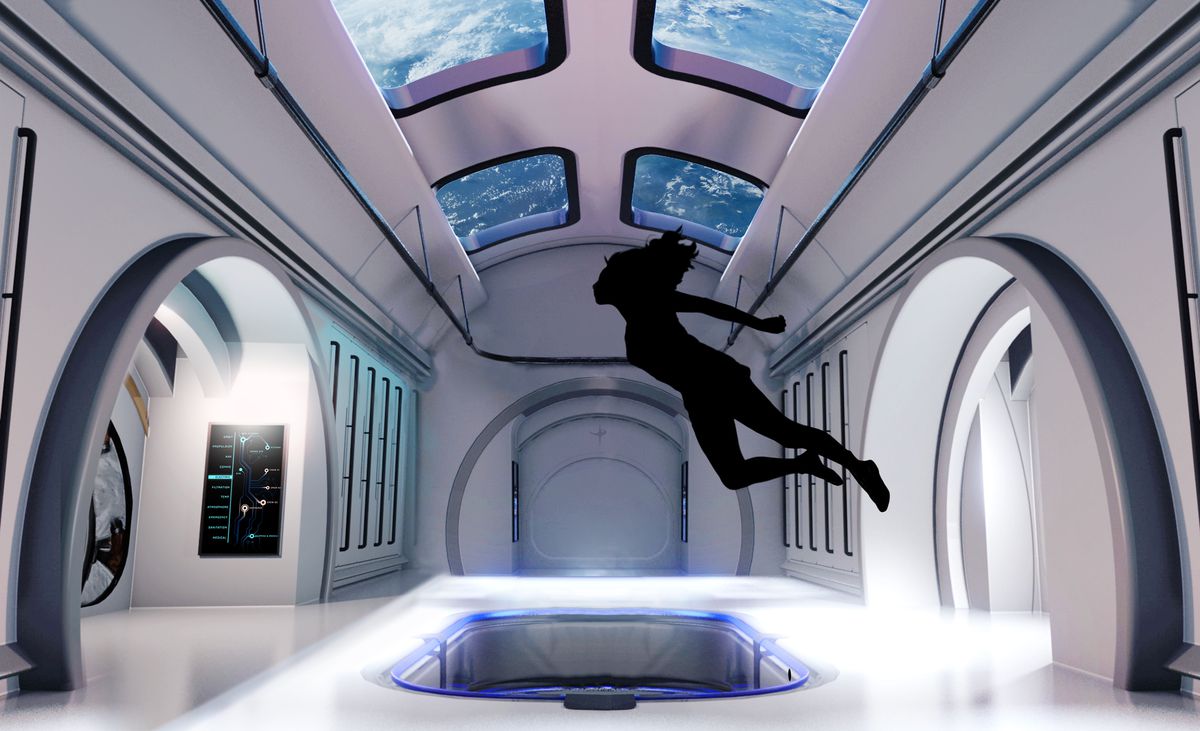 After more than two decades in orbit, NASA is preparing to retire the International Space Station. The habitable satellite only has permission to operate until 2024, and while it’s likely that the space station’s funding could be extended until 2028, NASA plans to decommission the ISS and find a replacement by the end of the decade. Cue Jeff Bezos.

The billionaire’s spaceflight company, Blue Origin, has released its proposal for a new, commercial space station called Orbital Reef. With the help of several other companies, including Sierra Space and Boeing, Blue Origin plans to build a satellite that’s slightly smaller than the ISS and houses up to 10 people. The design includes desk space, computers, laboratories, a garden, and 3D printers. The goal, the company says, is to bring the “mixed use business park” concept into orbit and lease out office space to interested parties, including government agencies, researchers, tourism companies, and even movie production crews.

figuring out how exactly to remove from orbit. While space stations have been helpful for space exploration, Blue Origin senior vice president Brent Sherwood argued in a recent op-ed that private companies now have the capabilities to take over much of the burgeoning economy in low-Earth orbit, or LEO. Blue Origin is even building a space tug, a transport vehicle that moves cargo between different orbits, that could reportedly be used to salvage parts from the ISS and incorporate them into Orbital Reef’s systems.

NASA doesn’t mind the corporate takeover of low-Earth orbit. The agency’s first space station, SkyLab, was only in orbit for a few months before NASA let the vehicle descend and decompose into the atmosphere. The space agency has been weighing defunding the ISS, which is full of aging hardware, for several years, and has already set aside up to $400 million to fund new, privately built and operated space stations through its Commercial LEO Destinations program. Eventually, NASA hopes that it can send its astronauts to these stations instead of paying to maintain the ISS. Overall, the plan could save the government more than $1 billion every year.

“This is technology that is over 20 years old at this point. When you expose that infrastructure to radiation, solar weather… things are going to break down,” Wendy Whitman Cobb, a professor at the US Air Force’s School of Air and Space Studies, told Recode. “Having these commercial space stations will be a way of America keeping their foot in low-Earth orbit while focusing more of their resources on moon and Mars exploration.”

In the meantime, NASA is currently focusing on the Artemis program, an ambitious plan to establish a long-term human presence on the moon. The agency intends to send people to the moon for the first time in decades as soon as 2024, and hopes the project will eventually serve as a stepping stone to future exploration of Mars. Private companies, including Blue Origin, have desperately fought for a role in this prestigious mission, and especially a lucrative contract to develop pivotal moon landing technology. SpaceX won that contract earlier this year, prompting Bezos’s company to sue NASA and lobby the Senate to reverse the decision. Those efforts have yet to bear fruit, so Bezos now seems to be turning his attention back to the low-Earth orbit economy, where there are more customers and less competition from Elon Musk.

But there’s reason to believe that the Orbital Reef project may not succeed in the near future — or at all. Blue Origin still hasn’t launched humans into orbit, a feat SpaceX achieved last month during the Inspiration4 mission. Blue Origin also lists its New Glenn reusable launch system and Boeing’s Starliner crew vehicle as pivotal parts of the Orbital Reef plan, but both vehicles have yet to conduct a problem-free space flight.

Blue Origin isn’t the only company vying to replace the ISS. About 12 other firms have already sent space station proposals to NASA’s Commercial LEO Destinations program. Just last week, a space company called Nanoracks announced that it was also developing a space station, in partnership with its majority owner Voyager Space and Lockheed Martin. At the same time, NASA has already agreed to pay the space company Axiom Space $140 million to help build at least one module, or detachable space station component, that will be conjoined to the ISS. That module will eventually be spun out and attached to several other modules to form a separate, fully functional space station when the ISS winds down operations. That approach is supposed to make it easier to transfer the hardware that’s currently aboard the ISS onto a new vehicle.

In a statement, a NASA spokesperson described the current moment as “a renaissance for human spaceflight.” They added, “As more people fly to space and do more things during their spaceflights, it attracts even more people to do more activities in low-Earth orbit and reflects the growing market we envisioned when we began NASA’s Commercial Crew Program 10 years ago.”

For NASA, it’s also critical that at least one of these companies succeeds, and the agency told Recode it could fund up to four of the proposals. After all, time is running out on the ISS, where malfunctions and outdated technology and equipment are common. Without private companies stepping in to build an alternative, the US government risks a future where it has a human presence on the moon and Earth, and nowhere in the middle.