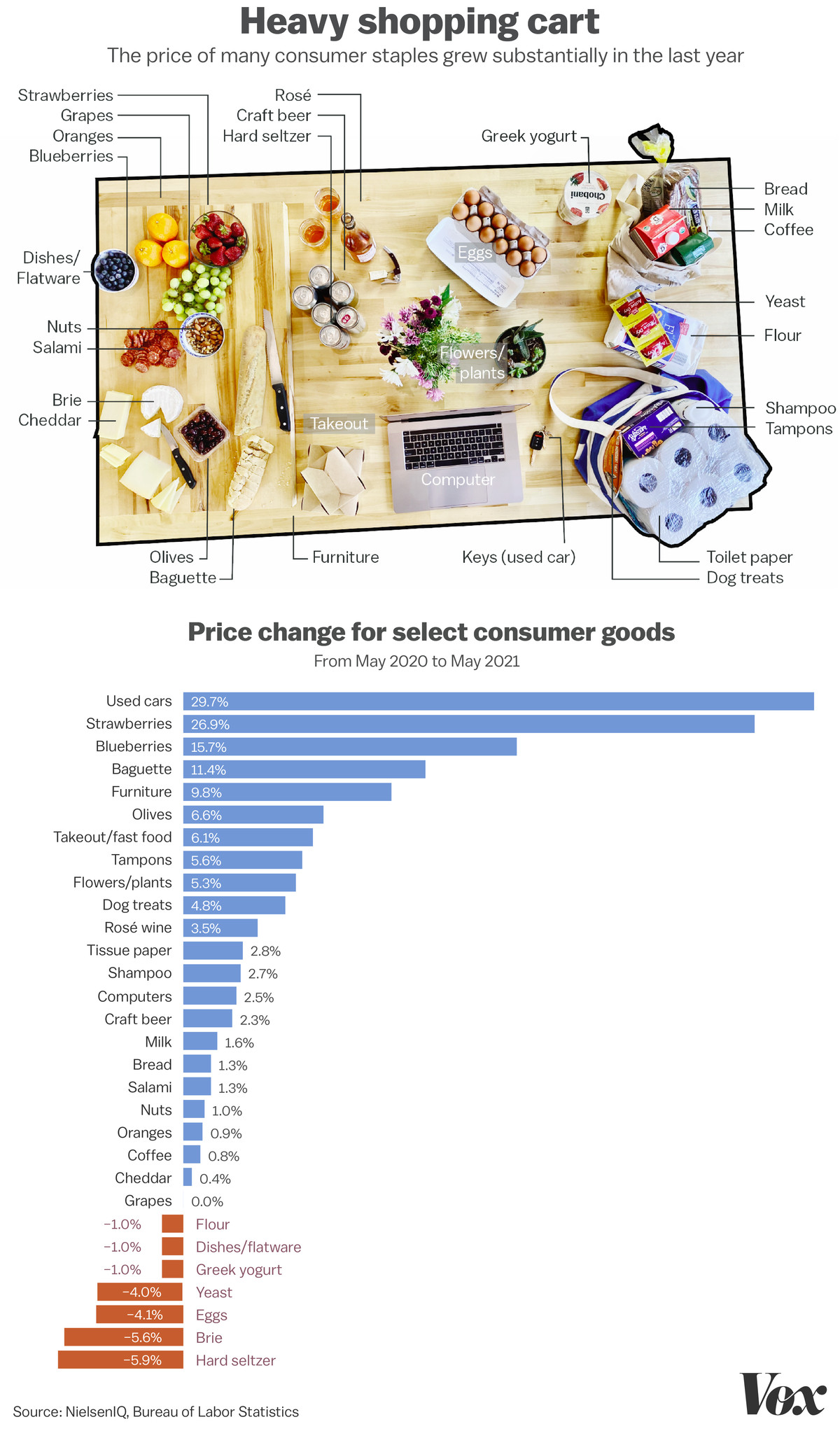 You’re not imagining it — many items are more expensive than they used to be. Some by a little, others by a lot. The United States isn’t in runaway inflation territory right now, but we’re definitely seeing some unusually pricey consumer goods.

If you haven’t noticed it in your day-to-day life, you’ve at least seen it in the headlines: From flights to lumber to chicken wings, prices are higher for many goods and services across the economy. Some people are pointing to these and other price increases as signs that worrisome inflation is on the horizon, arguing that the situation could soon rival what happened in the United States in the 1970s — a period of “stagflation” when the US saw high inflation coupled with slow economic growth and high unemployment.

But many economists and policymakers, including the chair of the Federal Reserve, think it’s likely transitory and that the economy might just be running a little hot right now. They say it will likely cool down as some of the post-pandemic bottlenecks and imbalances work themselves out. It looks like it’s already starting to happen in lumber. It’s also worth noting that last year we saw deflation in some areas of the economy, meaning prices went down, and so it makes sense that they would rebound.

So what’s happening right now? Consumer prices were up 5 percent from the previous year in May, according to the Bureau of Labor Statistics’ Consumer Price Index, which looks at prices for goods across the economy to get an idea of inflation. It’s a level of increase we haven’t seen since 2008, and one that we’ve only seen a handful of times since the early 1980s. Typically, the Fed targets a 2 percent inflation rate over the long term, though inflation has actually been running below that in recent years.

Prices went up by 0.6 percent in May alone. It’s quite a break from recent history: In the years following the Great Recession, the question many economists have been asking themselves is why inflation was so low.

What’s perhaps more interesting than the topline number, though, is what’s underneath it. Sometimes, major price increases or decreases in one specific area can sort of throw the overall picture out of whack. (That’s why you hear people talk about “core” inflation, meaning prices excluding food and energy, which can be volatile because of factors like weather and oil supply.) Recently, one area is causing a stir: used cars, whose price went up 7.3 percent in May, after going up 10 percent in April. Used car prices are now up nearly 30 percent since last year. If you take them out of the equation, the situation can look a little bit different.

To be sure, used cars aren’t the only story. The prices of plenty of items have crept up over the past year. Gas prices are up significantly over the past year due to a variety of factors including higher oil prices, a shortage of truck drivers, and a big increase in demand as people start driving and flying again. Gas prices fell significantly at the start of the pandemic, too, which is part of what makes the current increase seem so eye-popping.

Your overall life might be a little more expensive right now

The price of the stuff we buy changes all the time for a variety of factors, from supply chain issues to our changing habits.

The pandemic, of course, meant a disruption in supply chains and habits. All of a sudden, millions of Americans were stuck at home, hoarding toilet paper and clearing grocery store shelves. Items we might have once purchased at restaurants, we tried to recreate at home with ingredients from the supermarket. And it became increasingly important to give our homes, where we spent a disproportionate amount of our time, an update to make them more livable. Our demand led to shortages in everything from pasta to couches. Covid-19 wreaked havoc on the supply side as well, as the virus spread among employees at meat plants and garment factories alike.

To look at what’s happened to prices for a number of goods, we assembled our own little shopping basket. For the most part, prices went up, according to consumer price data from NielsenIQ, which tracks US checkout prices at a wide variety of retailers, as well as supplementary data from the Bureau of Labor Statistics.

After toilet paper became readily available and people stopped stockpiling it as much, its price only rose about 3 percent from last year. Staples like milk and bread rose just slightly, 1.6 percent and 1.3 percent, respectively.

Meanwhile, some prices rose dramatically. As mentioned, used car prices are up nearly 30 percent, due to supply chain disruptions in the new car market, including a global shortage of semiconductor computer chips. Prices for some fruits, like strawberries and blueberries, are up 27 and 16 percent, respectively, as demand for the fruits surged during the pandemic and outpaced supply. Produce prices are always subject to high volatility since there are so many variables with planting and harvesting.

The cost of kitchen and living room furniture, due to a mix of supply chain bottlenecks and demand to fix up our personal spaces during the pandemic, is up about 10 percent since last year. Dog treat prices are up 5 percent, perhaps as a result of increased demand from the large number of pet adoptions during lockdown. Takeout prices were up 6 percent.

While the price changes of cheese varied widely by type (Brie down 6 percent, cheddar up 0.4 percent), overall the average unit price of cheese rose about 4 percent in the past year. That growth reflects the fact that many people bought more premium cheeses at home since they couldn’t get them out, according to NielsenIQ.

There were a few notable exceptions where prices actually declined since last year. The average cost per unit of flour and yeast, the ingredients to make last year’s ubiquitous homemade bread, fell 1 percent and 4 percent respectively. That doesn’t necessarily mean they’re getting less expensive, but rather that people are more likely to wait for sales than they were in spring 2020, when, if people could find staples in stock, they’d buy them regardless of price. Similarly, the price of eggs went down 4 percent. Prices for hard seltzer, the unofficial summer drink of 2019, declined nearly 6 percent, perhaps reflecting the increased selection available, with everyone from Budweiser to Topo Chico getting in on the action.

One of the biggest price surge stories of the year thus far has been lumber. (Vox has a full explainer on it here.) The lumber industry struggled in the years following the Great Recession, and production slowed accordingly. When Covid-19 hit, many in the industry assumed that the situation was only about to get worse, so they dialed back production even more. In the case of many mills and yards, economic shutdowns wouldn’t let them work anyway.

“They really dialed back, thinking that demand would fall, and the reality is that demand never slowed,” Dustin Jalbert, senior economist and lumber industry specialist at Fastmarkets RISI, told Vox in the spring.

It turns out lots of people stuck at home had the same idea to undertake home renovation and remodeling projects. They built out decks and garages and offices and found ways to make the houses they were stuck in 24/7 more pleasant. Others went looking for new homes, snapping up preexisting ones and starting to build.

The supply-demand imbalance threw much of the industry out of whack, and lumber prices soared. In the summer of 2019, 1,000 board feet of lumber (one board foot is 12x12x1 inches) out of a sawmill would have run somewhere in the $300 range, according to data from Fastmarket Random Lengths. In May, the same amount of wood was going for more than $1,500 at some points.

Now prices have begun to come down, falling back below $1,000. It could be a sign that the supply chain is starting to balance itself out and that the demand side, in the face of high prices, has taken a breath that’s allowed some of the supply side to catch up.

This is what some economists say is likely to happen across the economy as some of the post-pandemic kinks get worked out. The supply side will catch up with the demand side as supply chains normalize, and in some cases, pent-up demand will ease, too. “The prices that are driving that higher inflation are from categories that are being directly affected by the recovery from the pandemic and the reopening of the economy,” Federal Reserve Chair Jay Powell said at a press conference in June. He specifically invoked lumber: “The thought is that prices like that have moved up really quickly because of the shortages and bottlenecks and the like. They should stop going up and at some point, in some cases should actually go down. And we did see that in the case of lumber.”

There is no denying that some prices are rising at a quicker clip than they have in recent years; the big unknown right now is how long this will go on. The Fed and the White House are betting that the current level of inflation is transitory, meaning this is a temporary bump as the economy rebounds from the pandemic, and soon things will settle back down.

In testimony before Congress in June, Powell laid out the factors contributing to recent inflation increases, including falling prices at the start of the pandemic, supply bottlenecks, the pass-through of oil and energy prices, and increased consumer spending accompanying reopening. “I will say that these effects have been larger than we expected, and they may turn out to be more persistent than we’ve expected, but the incoming data are very much consistent with the view that these are factors that will wane over time and then inflation will then move down toward our goals,” he said.

The personal consumption expenditure (PCE) price index, which the Fed uses as its main gauge of inflation, ticked up slightly less in May than economists expected, which could be a signal that the pace of price increases is slowing. However, it’s too early to tell.

The big fear among some economists is that the US will see a repeat of the 1970s, when the country saw a sustained period of high inflation that was only brought to an end when the Fed took harsh measures and pushed the economy into a recession in the early 1980s. If inflation takes off and jobs and wages don’t go with it, then everyday items can become prohibitively expensive for many people. In the ’70s, for example, beef became super pricey. Sustained inflation can also reduce the value of savings.

Some more extreme corners even warn that the US could see runaway hyperinflation like what’s happened in places such as Argentina and Venezuela, where the value of their currencies has declined rapidly and it’s nearly impossible for people’s paychecks to keep up with skyrocketing prices.

Amid those concerns, it’s important to remember that the Fed is paying attention to inflation. If the economy really doesn’t settle down, the Fed has tools to fight it, such as raising interest rates. Fed officials have already moved up their expected timeline for increasing interest rates to 2023 from 2024, though forecasts can always change.

It’s understandable to worry about inflation — a scenario where prices go up and paychecks don’t isn’t one the country wants to see. But is it time to start hoarding gold under your mattress? Probably not. That post-pandemic vacation you wanted to take is probably going to run you a little more than you thought it would, at least for now. The good news is, compared to a year ago, it’s much safer in the US to take a vacation at all.