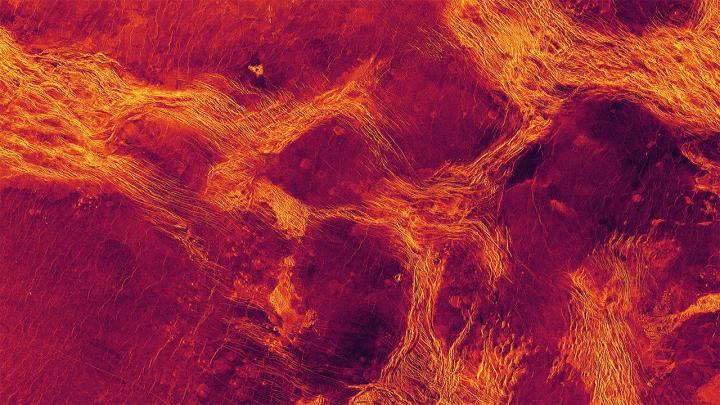 The team used observations made by the Magellan probe, which orbited Venus from 1990 to 1994 and mapped the surface using radar. The features it spotted have been analyzed before, but the new study uses a new computer model that can recognize surface deformations indicating large block structures in the lithosphere. These blocks, each about the size of Alaska, seem to have been sluggishly jostling against each other like broken pack ice on a pond or lake.

This is quite different from the current type of plate tectonics on Earth. But if confirmed, it would nonetheless be evidence of heat currents and molten material in Venus’s interior—something that’s never before been observed. The authors think parallels with Earth’s geology during the Archean Eon (2.5 to 4 billion years ago) suggest that the “pack ice” patterns could be a transition from an earlier period of plate tectonics on Venus when the planet was more Earth-like.

This movement “is widespread across the Venus lowlands, and argues for a previously unrecognized style of global tectonics,” says Sean Solomon, a research scientist at Columbia University and a coauthor of the new study.

The findings only fuel more excitement behind the new Venus missions recently approved by NASA and the European Space Agency. Solomon says he and his team hope all three can provide “critical data for testing the ideas we’ve described in our paper.” Those missions won’t be ready to launch till closer to the end of the decade, so let’s hope the excitement doesn’t wane over the next several years.