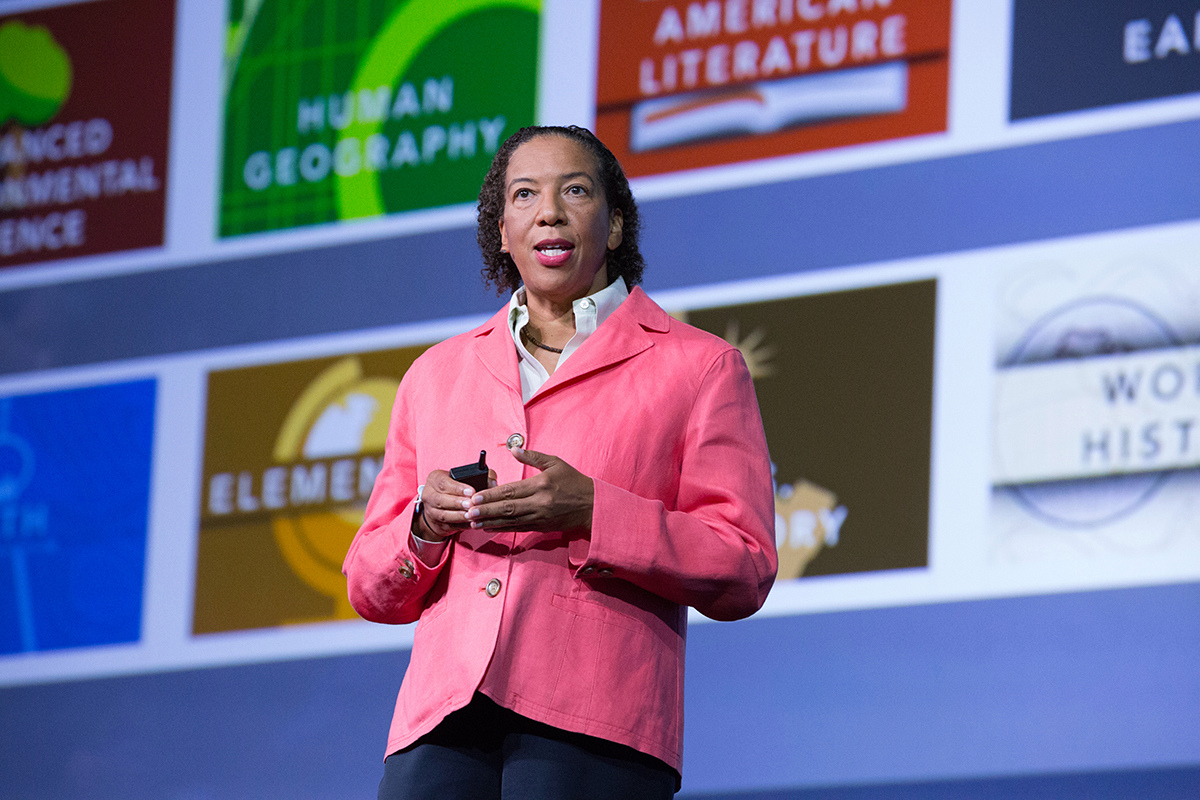 Here on Earth, we have more detailed maps of Mars than of our own ocean, and that’s a problem. A massive force for surviving climate change, the ocean absorbs 90% of the heat caused by emissions and generates 50% of the oxygen we breathe. “We have the ocean to thank for so many aspects of our safety and well-being,” says Dawn Wright, oceanographer and chief scientist at geographic information system (GIS) provider Esri, who notes the ocean also provides renewable energy, a major food source, and a transportation corridor for not only ships but submarine internet cables.

Now, the same type of smart maps and geospatial technology guiding outer space exploration support the quest to better understand and protect our ocean. “For the first time, our knowledge of the ocean can approach our knowledge of the land,” Wright says. “We can turn the unknown deep into the known deep.”

GIS—the location intelligence technology businesses and governments use for everything from risk mitigation to crisis response, market analysis to operational efficiency—also applies to the ocean. The logic is simple: the ocean supports a sustainable planet and economy, and data-rich maps can support a sustainable ocean.

‘Tons and tons of beautiful data’

More than 80% of the ocean floor remains unmapped, yet comprehensive ocean maps will be essential for stemming the problems of overfishing, habitat destruction, pollution, and biodiversity loss. It’s easy, and at this point cliché, to say “save our ocean,” but a data-driven map compels people to see why the ocean needs saving, where to start, and what needs to be done. “Seeing the ocean in its true depth and complexity is exactly what we need if we hope to reduce the risk of critically damaging or exhausting marine resources,” Wright says.

Since its release in 2017, the world’s first 3D ocean map spurred a revolution of innovation in ocean-related data and sustainability solutions. The 3D digital ocean map sorts global water masses into 37 distinct volumetric regions, known as ecological marine units, defined by factors in ecosystem health and recovery: temperature, salinity, oxygen, and nutrient levels. Scientists, environmental managers, fishers, and shippers, as well as citizen scientists can use the map to virtually navigate and explore the ocean.

What makes the 3D map of the world’s ocean possible is the enterprise technology capable of collecting and processing data that comes in massive volume and variety. And there’s more data on the way. “This whole idea of marine robotics is one of the big future visions for the ocean,” Wright says. “Robotics and sensors and other instruments are creating tons and tons and tons of beautiful data.”

Once collected, those volumes of data go into a GIS where they are managed and processed, using artificial intelligence (AI) to quickly identify and classify information. The output of GIS, often called location intelligence, comes through as smart maps, spatial analytics, and real-time dashboards—the same kind seen across the world this past year to track and analyze the coronavirus pandemic. These GIS-powered interactive data visualization tools bring clarity even to the most complex of issues and help steer policy and commercial decisions based on a solid grasp of what’s happening now and what will happen next.

‘The ocean is vulnerable’

Growing up on the Hawaiian Islands and working in American Samoa, Wright understands the ocean as a sacred place. That sentiment guides her work now with fellow scientists, government leaders, and business executives. “I want people to understand that the ocean is vulnerable,” Wright says. “What we’re doing to the ocean right now is having huge consequences. Our day-to-day weather and our long-term climate fully depend on the ocean.”

For Wright, the establishment and enforcement of marine protected areas, such as Cook Islands Marine Park off of New Zealand and Papahānaumokuākea Marine National Monument in the US, represent a triumph in keeping the ocean protected. So far only 7% of the ocean has been marked as protected, compared to 15% of the land. “Even though we have about 7% of the ocean protected in these parks or reserves, less than half of that is an area where you’re not allowed to fish or take the corals or take the pretty rocks,” Wright explains. “So, we have a long, long, long way to go there.”

Protected areas, predictive maps, and pleas from scientists certainly make an impact on corporate and policy decisions. Add to that increasing climate risk and global pressure for social responsibility. These incentives, and the GIS tools needed to respond, are motivating leaders to implement new initiatives.

For example, shipping companies are working to decrease greenhouse gas emissions by designing more efficient vessels, a move that furthers the sustainability cause while reducing business expense. Industries such as retail and manufacturing are putting circular economy principles in place to reclaim or recycle materials after the product has completed its original use. Aquaculture companies are selecting prime locations for responsible fish farming to help reduce overfishing, encourage aquatic ecosystem restoration, and recover endangered species.

Such efforts are moving us toward the vision of a sustainable ocean and thus a sustainable planet. Although Wright feels certain with so much advanced technology—“it’s a great time to be mapping”—what’s less certain is whether the work scientists, governments, and companies are doing will be enough or cede results soon enough.

‘The ocean isn’t too big to fail’

Concerned about mounting threats to the ocean, the United Nations has declared 2021 to 2030 the Decade of Ocean Science for Sustainable Development. “It’s like the Paris Climate Accord for the ocean,” Wright says. “To me, it’s the moonshot … to have something this focused for everybody—governments, universities, nonprofit organizations—this is a really big push.”

A number of important ocean mapping projects are already in various stages of development and execution. For example, Seabed 2030 has the ambitious goal to map the entire ocean floor by the year 2030. The Map of Biodiversity Importance shares habitat models for more than 2,200 at-risk species in the contiguous United States, featuring AI predictor layers for species viability based on development plans and environmental factors. And the Ocean Health Index annually assesses ocean health by looking at social, ecological, and economic benefits to speed progress on ocean policies.

Such projects will aid socially responsible companies (those building sustainability solutions to match business opportunities) in achieving profit while preserving the ocean. Their work often revolves around complex and real-time data, stored and processed with GIS, and presented on smart maps and data visualizations with GIS. Location intelligence helps companies—especially shipping, energy, logistics, and fishing industries—questions like the following:

As the world slowly emerges from the pandemic and enters the United Nations’ Decade of Ocean Science for Sustainable Development, it can do so knowing companies, scientists, and policy makers have the power to make smarter choices for people and the planet.

Those choices will be guided by comprehensive data about the ocean, the technology to map crucial information, and the understanding how, when, and where to intervene. The linchpin will be making sustainability choices in time. “It turns out that the ocean is not too big to fail, unfortunately,” Wright says. “The good news is that it’s also not too big to fix.”