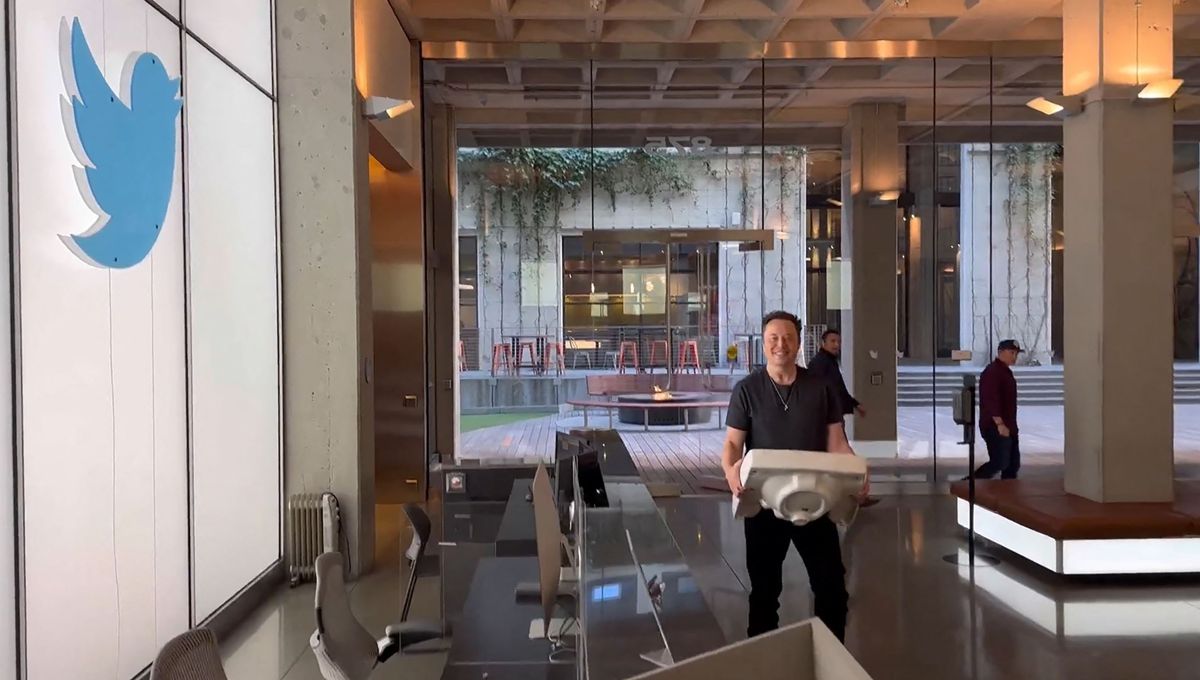 Justin Halpern has more reason to love Twitter than most of us. The 28-year-old had trouble finding a writing job in Hollywood, so he moved back in with his parents in 2009 and started @shitmydadsays, where he posted all the shit his dad said. The account quickly went viral. By 2010, he had a book and a TV series based on it. He’s now an executive producer on Harley Quinn and Abbott Elementary.

But @shitmydadsays has been dormant for years, and Halpern doesn’t tweet much anymore from his personal account. He says he went from posting daily, to weekly, and now mostly uses it to keep up with the news.

“I realized I felt much better the less I used the site,” he said.

Halpern’s move away from Twitter predates Elon Musk’s takeover by several years, and it’s indicative of some of the problems Twitter was facing before Musk came along. Twitter has always had an outsized impact as a major driver of news, thanks to who uses it and how. But that’s a fraction of the number of people who use competing platforms. Like Halpern, some of Twitter’s power users had significantly reduced or even stopped their usage of the platform, and user growth overall has slowed.

Now that Musk owns the site and prepares to launch his “Twitter 2.0,” it almost certainly won’t be the same. So a lot of people will be looking for a Twitter replacement. Some possibilities have already emerged, like Mastodon and Post.

We may not need another Twitter, or even the one we have now. But it did show us what a digital town square could be, even if Twitter itself never actually was one. Whatever replaces that, if anything, may not look much like Twitter. It may not even be text-based.

Twitter’s major needs are users and revenue, and it has struggled to get both. Back in 2014, the Atlantic wrote a (preemptive) “eulogy” for Twitter, citing less active users, less fun, and more spam and abuse. Eight years later, Reuters reported on internal Twitter documents that said the platform’s most active users, who generated 90 percent of its content, were leaving.

advertisers, and even the average person who only uses Twitter to keep up with the news. The billionaire believes that Twitter is dominated by the “media elite” and part of mainstream media’s “oligopoly on information.” He says he wants Twitter to be a place where “citizens” can compete with those journalists, but he also wants to charge users $8 a month to have their tweets pushed above all the spam tweets that Twitter is increasingly filled with. Musk is also determined to loosen up Twitter’s moderation and rules, saying it’s in the interests of free speech. But some of the “free speech” on unmoderated Twitter is bound to be stuff its users and advertisers don’t want to see, and, in some cases, could be harmful to society.

“Musk gave advertisers the reason they were looking for to pull the plug on Twitter,” Enberg said.

Not just the advertisers. Users are looking at other options, even as Musk claims that new user signups are higher than ever. Whoever remains when the dust clears may see a very different platform. Aside from the increased hate speech and newly restored accounts run by avowed white supremacists, there’s also whatever Twitter looks like for people who don’t pay for Twitter Blue. Musk has made it clear that they will have a much worse experience on Twitter than its paying users, their tweets treated as little more than spam.

Musk called Twitter a “digital town square,” and we now know that Musk’s vision of that includes a monthly entrance fee and Musk himself being the sole arbiter of what’s allowed to be said in it. If Twitter ever was a digital town square in the first place, it won’t be one soon. So what fills that void?

Mastodon is the early leader, but it won’t be enough for most people

Prior to purchasing Twitter, Musk wondered if he should build his own version. He tweeted, “is a new platform needed?”

After he bought Twitter, a lot of people started asking the same question. A number of existing platforms have emerged as potential Twitter replacements, and there are more in the works now. And while there’s certainly an interest in an alternative to Twitter, that alone doesn’t guarantee success.

It’s impossible to replicate the conditions that helped create Twitter back in 2006 because they no longer exist. The internet was a different place than it is today, down to how most of us access it (through web browsers, since the iPhone had yet to be invented), and a lot of what Twitter is now wasn’t even part of its founders’ vision. Many of the features that are inextricably associated with Twitter today — retweets, quote tweets, hashtags, and “threads” of multiple posts — were created by its users.

“Lots of features on Twitter developed as a kind of demand from how a particular community used it,” Bell said. “You can create the technology, but you can’t anticipate the community and what it’s going to do with the technology.”

We also know that past attempts to create Twitter clones haven’t panned out. Several companies tried to capitalize on conservatives who thought Twitter was too biased toward liberals: Gab, Parler, GETTR, and Truth Social. They’ve all had a hard time attracting users and money, and some of them are little more than echo chambers with a side of virulent racism (in the name of free speech).

At least one platform hopes to capitalize on the latest Twitter exodus. Post, which launched just a few weeks ago, is in very early beta stages with just over 100,000 users, but it has managed to attract some of Twitter’s power users and a good number of its journalists. This makes sense, as journalists and people who follow them appear to be Post’s target audience, but it remains to be seen if Post will get widespread adoption or simply be another echo chamber with limited outside interest.

There are also Twitter-like platforms whose creation pre-date Musk’s takeover: cohost, CounterSocial, and Hive Social, to name a few. They have their own pros and cons, but they don’t have anything close to Twitter’s scale, even as they’ve enjoyed user bumps in the last month. Some of them simply aren’t ready for primetime. Hive Social, for instance, says it has 2 million users. But it only has three people working on it, and it refuses to disclose the last names of two of them. It’s also, literally, unusable, as it temporarily shut down after multiple severe security issues were found.

And that brings us to Mastodon, which seems to have emerged as the leader in the Twitter alternative wars. This makes sense, since Mastodon has been the Twitter refuge of choice for previous Twitter exoduses since it launched in 2016. It now has 5.6 million users, of which 2.6 million are active. Mastodon looks like Twitter and does a lot of the same things. But it’s not the same, and people who hope or expect it to be have been unpleasantly surprised. Mastodon is just harder to use than Twitter.

Unlike Twitter, which is just one centralized platform for all of its users, Mastodon is made up of a network of thousands of “instances,” or servers, that operate independently while also being able to interact with each other (sort of like how you’re able to email people even if they have different providers). Different servers have different focuses, some based on common interests and some based on location. Some have thousands of users, and some have a few dozen. If you don’t like the server you chose, you can pick up and move your account, followers, posts, and all, to a different one. You can see why that’s especially appealing to some people now.

But you can also see why people are so used to having everything and everyone on one platform whose algorithms help them find interesting accounts or tell them what’s being talked about by a lot of users will be turned off by Mastodon, a place that does none of those things.

Mastodon is the most popular of the Twitter alternatives for now. But it won’t, by design, become the world’s water cooler or modern newswire that Twitter became.

“What else do we lose in losing a medium where lots of people are talking all over the globe, open to be heard by hundreds of millions of people?” Zuckerman said. “That seems much harder to recreate.”

Twitter probably will endure in some form. It’s become too important for all of its users to just pull up stakes and leave. But Musk’s takeover may have significantly shortened its lifespan. The next Twitter, whenever it emerges, may not look much like Twitter at all.

Will a younger generation that loves video-based apps like TikTok and YouTube have any interest in producing or consuming text? How much longer will tapping on tiny phone screens be the primary way most of us interact with the internet? Will the internet continue to essentially be run by a few profit-driven entities?

Bell, for one, would like to see platforms like Twitter become public utilities or services meant to serve the public interest first. She points to Wikipedia — a nonprofit that doesn’t accept ads and is one of the most visited websites in the world — as an example. And sure, Wikipedia is successful. But Mastodon is also a nonprofit public interest project, and it may never be more than a niche platform.

Zuckerman hopes the next phase of social media will empower users and let them choose the experience they want to have on the platforms they frequent.

“We’ve got these spaces, whether it’s Facebook, whether it’s Twitter, whether it’s Reddit — they are commercially owned and controlled,” he said. “And we try to use them as the public sphere because we don’t have any particularly good alternatives to it.”

This is something Zuckerman’s been working on. A “social media browser system,” first as an experiment at MIT Media Lab, and soon, he says, as a product people can actually try. Users can pull in feeds from multiple platforms and apply their own algorithms to filter content, rather than whatever those platforms apply for them. It’s an interesting concept — why tap between four different apps if you can have them in one place, and why let them choose what you see — but currently, it needs every platform to cooperate. They don’t.

Help us reach our goal

In our recent reader survey, we were delighted to hear that people value Vox because we help them educate themselves and their families, spark their curiosity, explain the moment, and make our work approachable.

Reader gifts support this mission by helping to keep our work free — whether we’re adding nuanced context to events in the news or explaining how our economy got where it is. While we’re committed to keeping Vox free, our distinctive brand of explanatory journalism does take a lot of resources, and gifts help us rely less on advertising. We’re aiming to raise 3,000 new gifts by December 31 to help keep this valuable work free. Will you help us reach our goal and support our mission by making a gift today?

We accept credit card, Apple Pay, and Google Pay. You can also contribute via