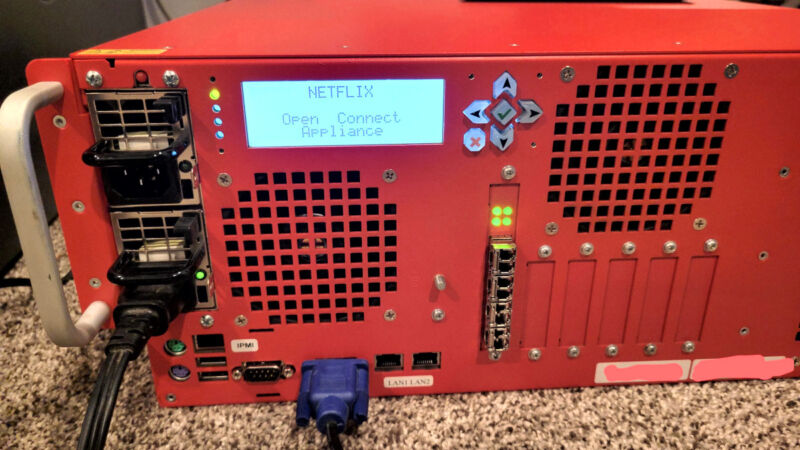 A Reddit user named PoisonWaffe3 recently acquired a 2013-era Netflix cache server that had been pulled from service and wiped for disposal, which marks a rare occasion the public has been able to get a look at the mysterious hardware, Vice reports.

The decommissioned cache server—called an “Open Connect Appliance” (or OCA)—operated as part of Netflix’s Open Connect content delivery network. Open Connect is a network of servers around the world embedded with local ISPs that contain local copies of Netflix video content, accelerating the delivery of that content to Netflix viewers by putting it as close to the viewers as possible (both geographically and from a perspective of network hops).

Netflix provides plenty of high-level documentation about Open Connect on its website, but what isn’t widely known is what specific components make the Open Connect servers tick—especially one that is almost a decade old. After removing three screws, PoisonWaffle3 took a look inside their unit and discovered a “pretty standard” SuperMicro motherboard, an Intel Xeon CPU (E5 2650L v2), 64GB of DDR3 RAM, 36 7.2TB Western Digital hard disks (7,200 RPM), six 500GB Micron SSDs, a pair of 750-watt power supplies, and one quad-port 10-gigabit Ethernet NIC card. In total, the server contains “262TB of raw storage,” according to PoisonWaffle3.

sought advice on what to do with the OCA, and suggestions ranged from mining the Chia cryptocurrency (which benefits from lots of storage space) to running a Plex media streaming server. Originally, the OCA ran FreeBSD, but the server had been completely wiped as part of the decommissioning process. Instead, PoisonWaffle3 installed TrueNAS, an open source operating system designed specifically for network file storage applications. Whatever path PoisonWaffle3 takes with the hardware, 262TB is still a lot of storage for one person—even in 2022.