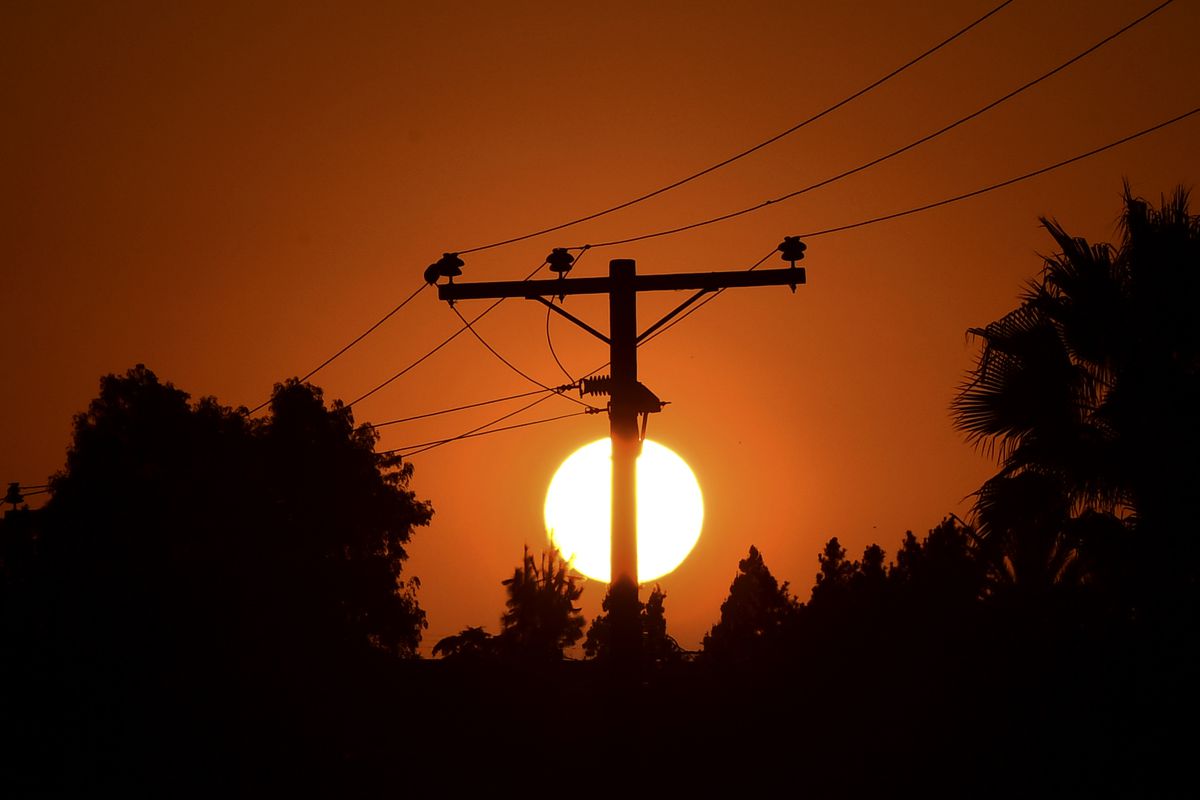 But it’s far from the first time extreme weather has caused serious problems with the power grid in recent months. During the winter storm that hit Texas in February, nearly 5 million people lost power. In June, California suggested that residents charge their electric vehicles during off-peak hours to save energy. And for the first time ever, after power outages hit several neighborhoods during this week’s heat wave, New York City officials sent residents an emergency mobile alert urging them to conserve energy.

It’s abundantly clear that the power grid in the United States is not ready for the effects of climate change, including the extreme weather events that come with it. After all, climate change isn’t just increasing the demand for energy to keep people cool or warm amid heat waves and winter storms. It’s also damaging the grid itself. The country is now in a race against time to shift its energy supply toward renewable sources, like wind and solar, while also needing more and more electricity to do everything from powering more air conditioning to boosting the number of EVs on the road.

“I would probably give our power grid maybe a C minus,” Kyri Baker, an engineering professor at the University of Colorado Boulder, told Recode. “It’s like this perfect storm of extreme temperatures, more electricity consumption, and aging infrastructure.”

Having a reliable power grid can be a matter of life and death. In the most severe power outages during the winter storm in Texas this past February, 700 people are estimated to have died, according to BuzzFeed. Hundreds of people died during this past week’s heat wave in the Pacific Northwest and Canada. Meanwhile, the effects of heat waves have been disproportionately worse for historically marginalized brown, Black, and Indigenous communities. People who are elderly, very young, who have certain medication conditions, or who work outdoors are also more likely to feel the impacts of extreme heat.

Climate change means that extreme weather events are becoming more intense and common, which is worrisome not just because the power grid is aging. The grid is woefully unprepared for an imminent and disturbing future.

How the US power grid works

Last year, about 40 percent of the country’s electricity generation came from natural gas. While the grid still relies on a good amount of coal-based power, a growing share of power is coming from renewable sources, like solar and wind power, which will hopefully make the grid more sustainable. But while some of these sources are a lot worse for the environment than others, they all contribute electricity to the grid, a giant engineering system full of high- and low-voltage wires, sensors, poles, and transformers that work together to transport electricity to your home.

Electricity travels across the grid, moving from high-voltage lines that carry the electricity across long distances to low-voltage lines, a process known as “stepping down.” The low-voltage lines distribute that electricity to buildings and then individual appliances and electronics. But there are hurdles. Right now, the country is still facing problems with the congestion of transmission lines that have maxed out on the amount of electricity they can carry. In Vermont, solar and wind energy have stalled because the grid is already too constrained.

“So it’s not like you can just set up a wire from point A to point B and everything will be fine,” Sam Gomberg, a senior energy analyst at the Union of Concerned Scientists, explained. “You need to set up little steps along the way to guide that electricity in the direction that you want it to go so that it ultimately ends up at your home.”

The US power grid is actually made up of several regional grids, or interconnections, that are tied together and operate on a synchronized frequency of 60 hertz. While these systems are very large, oversight of the grid is somewhat patchwork. Generating power for the grid are more than 10,000 power plants in the country. But the grid itself, including transmission and distribution systems, is operated by a mix of state-owned and private entities, including some public-private collaborations. Then, local utility companies like Con Edison in New York City and PG&E in San Francisco ultimately deliver electricity to peoples’ homes.

“The unique thing about the power system versus any other type of infrastructure is that it’s almost instantaneous,” Baker, of UC Boulder, told Recode. “So if I turn on a light in my house, there is an instantaneous mismatch in supply and demand. And the power plants actually respond almost in real time to that increase in demand.”

At the same time, that means not being hooked up with a broader system can cause problems. Texas, for instance, has opted to operate its own electric grid, which is largely independent from other regional power systems. While this has given the state more autonomy, some have argued that Texas could have avoided such devastating outages this past winter if the state’s grid had been able to draw from other power sources. Notably, nearby Oklahoma was able to turn to other states to keep its power on during the same storm.

Why the heat makes things worse

Summer heat can interfere with the US power supply in many ways.

Hot weather can drive up energy demands, often to power air conditioners, which can overload the electric grid and cause brownouts — partial outages that reduce the overall power available. At the same time, high temperatures can make power plants less effective, limit the amount of energy power lines can carry, and make failures more likely in transformers, which help control the voltage throughout the power grid.

That’s why, during the summer months, you might receive an alert telling you to cut back on electricity usage, like delaying vacuuming until the evening. If the problem gets bad enough, utilities might even use rolling blackouts — when a utility company temporarily shuts down electrical power for different areas in order to avoid overloading the entire system — in order to protect the grid. Of course, while officials might deem these steps necessary, rolling blackouts can be inconvenient and even risky for residents who need power to stay cool during heat waves. This past week, New York’s power company Con Edison distributed dry ice to some residents of Greenpoint, Brooklyn, who were left without air conditioning during a power outage.

The heat can cause problems for the electric grid beyond overcapacity. If the weather gets hot enough, power lines start to sag — a result of the metal inside them expanding — and risk striking a tree and starting a fire. At the same time, power plants are highly dependent on water, which they need to cool down their systems. This means that as hot and dry weather drives up demand for air conditioning, the increased need for energy is also driving up the power grid’s demand for water, which is often in short supply during periods of drought. Cooling systems need electricity, too, adding even more demand for energy.

Eventually, individual energy users become aware of these problems. This summer, California’s state power grid operator warned that people should prepare for temporary power outages. Last week, Portland had to shut down streetcar service. And in areas where there’s a high wildfire risk, utility companies might order rolling blackouts to lessen the risk of an overloaded grid causing additional fires.

What Biden wants to do to fix this

Fixing the power grid can’t be done in one fell swoop. Instead, the grid will need to be updated by transitioning to cleaner energy sources like wind and solar, adapting grid and energy storage infrastructure to adjust to these new types of power, and changing our approach to energy consumption in general.

The system also needs to predict and respond to changes in energy demand. One part of the solution is smart grid technologies, which use internet-connected sensors on various parts of the grid to collect a lot more detailed data about how well those parts are working. That real-time data can also help utility companies quickly resolve potential problems before they become widespread. The Biden administration supports deploying this tech, which could be key to making power grids more resilient.

In April, the White House also freed up $8 billion in order to boost the grid’s capacity to support renewable energy, and committed to making it easier for new, renewables-focused transmission lines to be approved. Joe Biden is now pushing to modernize the grid as part of his massive infrastructure plan. Through that plan, the president is hoping that the government will be able to spend at least $73 billion on improvements, including building thousands of miles of new transmission lines to expand renewable energy. This will be key to making renewables more feasible. As Vox’s Umair Irfan and Rebecca Leber explain:

Transmission lines can link areas that need energy with places where wind and solar power are cheap, which can be separated by thousands of miles. This would help boost the business case for wind and solar power. The proposal calls for a new grid authority to facilitate clean energy transmission, and an infrastructure financing authority to help come up with the money to pay for it.

But changes have to go beyond the federal government. Equipment needs to be updated on the regional and local level, too. Whether Biden will succeed in addressing the complex challenges of updating the grid remains to be seen. Without government action, private companies may be left with the job of fixing the grid, and there’s no guarantee they’ll put the long-term protection of the US power supply ahead of their profits.