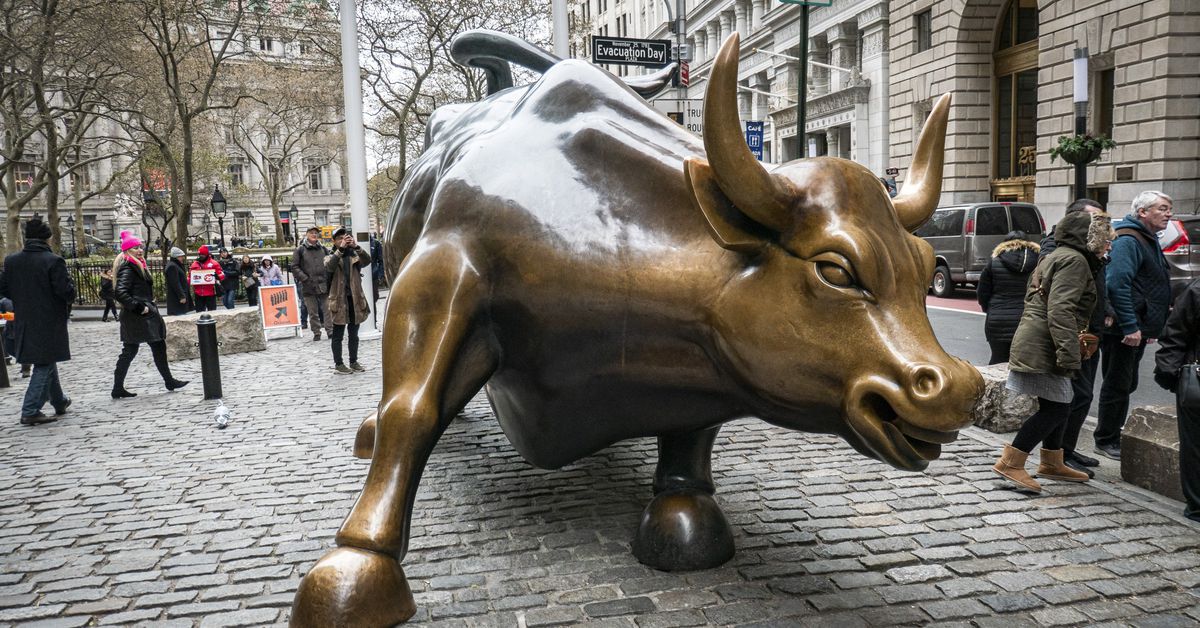 It’s hard to argue that everything going on in financial markets lately is particularly smart. The question is, how silly should we let things get?

Meme stocks like GameStop are still swinging wildly as they go in and out of fashion on Reddit. AMC recently told people buying its stock that they’re probably going to lose all their money. People are piling into cryptocurrencies based on memes and learning some hard lessons in volatility, much of which is driven by Elon Musk’s tweets. The NFT bubble might have already popped because it turns out spending hundreds of thousands of dollars on a GIF might not be the soundest investment.

Amid the chaos, there’s been quite a bit of hand-wringing among regulators, lawmakers, and finger-waggers on CNBC over what to do about it. Many investors are trading like it’s a game, and one that they are likely to lose — some knowingly, some not.

“Is there ever going to be a way to stop people from buying things at stupid prices? No,” said Andrew Park, senior policy analyst at Americans for Financial Reform. “There’s a key difference between people doing stupid things with their money versus being in positions where they’re either being exploited or manipulated.”

There’s a fine line between keeping people from taking too big of risks and locking them out of opportunities, between letting people do what they want with their money and keeping them from being swindled. How much to protect investors is a thorny question to answer — especially when sometimes they need to be protected from themselves, or they don’t want the protections at all. When I talk to day traders, the sentiment is often that they want to be able to take more risks, not fewer.

Speculation is hardly new; the same goes for gambling. Betting on a newly minted meme stock like Wendy’s or cryptocurrency like dogecoin isn’t all that different from playing blackjack, which is allowed. And Wall Street bigwigs take risks all the time, risks that can have major consequences for everyone. (See: the global financial crisis, or, more recently, the implosion of the hedge fund Archegos Capital that cost it and major banks billions of dollars.) The question regulators are facing right now as more and more people get into trading is which levers to pull and how much. There are plenty of ideas out there regarding what to do, such as increasing disclosures, shortening trade settlement times, or even banning certain practices and vehicles altogether. But new policies can come with certain trade-offs.

probably not getting the best execution on their buys and sells, but if you take away the mechanisms that facilitate that — which the Securities and Exchange Commission says it’s looking at — that might mean trading will no longer be commission-free. Reasonable minds can disagree about whether that’s the right move to make. It probably wouldn’t keep tons of people away from investing — day trading existed long before Robinhood — but it might keep some people out.

More broadly, there’s a difference between being encouraged to make bad decisions with your money and being allowed to. It’s hard not to think it would be a good idea for newbie investors to have some more friction before making risky bets. Most day traders lose money, and it’s often the case that the more they trade, the worse they do. Risky options trading can be particularly hard to win at in the long run. The problem is, the companies facilitating commission-free trading make more money the more people trade.

That there should be strong legal protections for investors and consumers so they’re not taken advantage of shouldn’t be controversial in American politics. After all, no one wants to be part of a system where they don’t have a fair shot of winning. At the same time, it’s hard not to wonder if they already are.

“Why are all these meme stocks and crypto really popular? To some degree, there is hope that somehow I can magically make enough money to pay off these student loans, because otherwise, at the pace I’m going, there’s no way I can do that,” Park said.

If we want to stop people from YOLOing their savings into bitcoin or putting money into a SPAC (special purpose acquisition company) whose business proposal seems like a blatant lie, we should also ask ourselves why they’re tempted to do so in the first place.

The era of meme investing is not necessarily an astute one

Some people are investing in meme stocks or cryptocurrencies or other risky assets because they genuinely believe in the underlying thing itself. There are people who really think crypto is the future, or hope GameStop can turn things around. But much of what is going on right now is decidedly not that. Matt Levine at Bloomberg Opinion got into the situation in a recent column:

The party is usually fleeting, but while it’s happening, for those involved, it can be fun. When it’s over, not so much. Some partygoers are left with varying degrees of a rough hangover. Every time there’s a big meme trade cycle, stories emerge of amateurs hitting it big on the upswing and suffering major losses on the downswing, sometimes days apart. When I talk to individual traders, I often hear the same story over and over again: They made some good bets early on, got overconfident, and then got wiped out. The hope is that people are playing with money they can afford to lose, but that’s not always the case. And sometimes, people wind up making trades they don’t even understand, with tragic consequences.

Tyler Gellasch, executive director of Healthy Markets, an investor-focused nonprofit, said he has concerns some of the meme stock trading is affecting the overall quality of and confidence in the market, a sentiment he’s not alone in. The whole idea of efficient markets is that capital flows to places where it will be put to good use, not businesses on the verge of bankruptcy. “You invest in companies to make money, but at the same time, we want the good companies to get the money and the bad companies to fail so that the good companies create jobs and things people will use,” he said.

The long term impact of $AMC + $GME isn’t about what happens to these companies or their stocks. It is about the public, which views the stock market (and economy) as something that is manipulated and not trusted.

To be sure, deciphering what is a good company and a bad company is not easy — there’s a reason stock-pickers tend to underperform indexes like the S&P 500. Sometimes, the bankrupt companies turn around. And if I want to toss my latest paycheck into a thing I saw float by on r/WallStreetBets, to a certain extent, who’s to stop me?

Many day traders seem to believe they’re in on the joke; they know they’re speculating, and they want to keep their right to it. Plenty of people look at a stock or a cryptocurrency and think they can get in and out and leave someone else holding the bag, and whether that’s good is much more of a moral question than a legal one.

“You’ve got to be realistic,” said Tom Gorman, a securities expert and partner at the law firm Dorsey & Whitney. “If you’re trading like it’s a game, you’re probably going to lose.”

One big issue now is whether investors actually realize the game’s rules and how it may or may not be stacked against them.

The house always wins in Las Vegas. On Wall Street, that’s often true, too: Nobody offering you a financial product or touting some new investment is really doing it for your health.

The recent boom in retail investing and day trading has opened up some important questions about whether people are being taken advantage of. In some cases, they may be falling victim to outright lies, scams, and fraud. In others, they’re being nudged in directions they shouldn’t be, or the guardrails are off.

Gary Gensler, the new SEC chair, has said he plans to take a look at what’s going on in the markets with regard to free trading apps, volatility, and individual investors to make sure traders are being protected. That means scrutinizing the gamification of apps such as Robinhood that sometimes encourage people to trade more, which often translates to losing more money. Gensler and multiple others have also raised concerns about payment for order flow, where big market-makers such as Citadel Securities and Virtu pay brokers like Robinhood to process trades, in turn presumably making money off the spread, which is the price difference between the buy and the sell. It’s how a lot of apps offer “free” trading, though the trading isn’t really free.

Recode has an explainer on what they are), are allowed to promise kind of whatever to potential investors. And so many of them do. The rocket builder Astra just went public via SPAC and says it will be launching rockets daily by 2025. It doesn’t even expect to make money in 2021.

“If SPACs blew up a few years earlier, it’s possible that Theranos would have been bought up by a SPAC at an absurd valuation,” Park said, referring to the blood-testing startup run by Elizabeth Holmes that turned out to be a fraud. The SEC has said it’s taking a look at SPACs, too.

Much of the debate here gets at an underlying tension around access to opportunity, even if the chances of things going wrong with said opportunity are greater than the chances of things going right. Many of the most potentially lucrative investments in the private markets are limited to accredited investors, meaning those who are sophisticated enough to take on more risk. “How do they define accredited? If you’re sophisticated. How do they define sophisticated? You’re rich,” said Michael Piwowar, executive director of the Milken Institute Center for Financial Markets and a former Republican member of the SEC.

If there were better opportunities in the economy, maybe people wouldn’t be gambling on AMC

Last year, I talked to a bunch of individual investors for a story on the retail trading boom. Some of them seemed to be making informed decisions; others, not so much. My line was always the same: I hope you’re not playing with money you can’t afford to lose (and if you have gains, they’re not just on paper). But did I hope they couldn’t play at all? Harder to say.

The typical and probably soundest investment advice people get is to put their money into an index fund and never look at it again until it’s time to retire. It is really impossible to time the market or to know where stocks and assets are headed next. If you caught onto bitcoin in 2012 and are now a bitcoin millionaire, good for you. But you are not most people.

Still, it’s hard not to wonder if some of the frenzy around meme stocks and crypto and the like is a reflection of the current economic moment, where for so many people, mobility feels really out of reach.

It’s of course bad for investors to be taken advantage of, to lose their shirts, and to wind up in financial distress. Margin trading for a day trader maybe shouldn’t be allowed; perhaps neither should an ATM at a casino. But you can’t really blame the anonymous traders on Reddit for their financial nihilism when the whole system feels stacked against them.

The stock market soared during the pandemic. It’s not the worst thing in the world that some regular people were along for the ride.